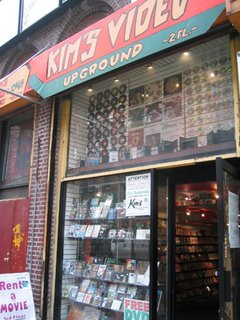 Sophia Hollander in the New York Times has written an excellent recounting of the last days of East Village video institution Kim’s Video and its move to Salemi, Italy. I was having dinner the other night with a director from abroad and one of the first things he asked me was what happened to Kim’s. I just emailed him the piece, which details the blows Mr. Kim’s underground video store suffered from Netflix.

Over the years, Mr. Kim, now in his late 40s, built a staff that traveled the world scouring for additional titles — the only way to find obscure films in the pre-Internet age. By 2008, the collection had swelled to 55,000 eclectic works, many impossible to find anywhere else.

Then the world changed.

The Internet had spawned Netflix, the elimination of late fees and no-effort rentals. The Internet also distracted consumers, stealing hours they might once have spent reveling in movies. In other words, the Internet was a force more powerful than the Blood Sword of the 99th Virgin, one of the more esoteric works in the Kim’s Video collection.

At the store’s peak in the 1990s, more than 200,000 people were listed in Kim’s database, but by the end of last year, only about 1,500 of them were considered active members. Though customers still harbored an obsessive affinity for Kim’s cult collection, along with its cantankerous employees and underground spirit, for too many of them, that affection had faded into a fond memory.

“Kim’s was the cutting-edge; that was always the business concept,” Mr. Kim said the other day in one of a series of conversations about the fate of his video collection. “But ironically, I didn’t prepare.”

The piece go on to detail the circuitous connections that led to the Salemi offer and the boxing up of all the videos.

“When I saw that we could have this collection,” said Mr. Toscani, director of the town’s Department of Creativity, “I thought it would be a great adventure, a great project.” New Yorkers, he added, “shouldn’t be upset because the movies are going to be in an incredible place; and on top of seeing Kim’s movies, they can see the landscape around Salemi that is something very special, much better than New York.”

“Salemi is the future,” Mr. Toscani concluded. “New York is the past. That’s why Kim’s is coming here.”

…The team is working on special provisions for Kim’s members who venture to Salemi, including free access to films and discounted places to stay. The team is also exploring the possibility of letting Kim’s members continue to “rent” films, either through mail order or, yes, Internet streaming.