TOM TYKWER AND THE PARANOID TRADITION

On the main page, Nick Dawson interviews The International director Tom Tykwer, and here they discuss one of my favorite sub-genres: the paranoid thriller. 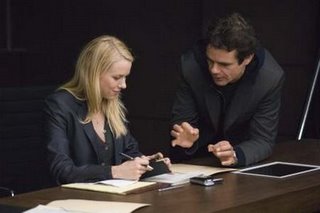 Filmmaker: You’ve said that you’re a movie maniac, so what were you influences for this film? You talked about paranoia and the thrillers of the 70s come to mind, especially those of Alan J. Pakula.

Tykwer: Pakula obviously is probably the quintessential filmmaker for what we would call the paranoia drama. Even though it’s not so obviously politically related, even a film like Klute has that vibe where there’s an uncertainty. There’s a feeling that Jane Fonda’s being looked at, there’s companies and places that look so starkly cold and corporate, and there’s human beings at the center of it that are just victims with no knowledge. That is the concept that drives all these movies, The Parallax View, All the President’s Men, and I just believe that these films have some qualities that make them kind of timeless. You see All the President’s Men today, and it’s an amazing film because it’s so intense and it takes the audience as serious partners in understanding and investigating this case. And there’s other films like The Conversation, which is one of my favorites of Coppola. A very, very important film for me in particular relation to The International was Marathon Man, again more a film that focuses on the thriller than the paranoia, but still there’s a company that’s called “The Company” that works beyond the CIA or within the CIA – you don’t really understand – and it all represents this kind of fear system that people obviously found a lot of truth in. It represented a contemporary fear, but it’s now transformed into global economy representing this, much more our daily life being controlled by them than by the secret services. But I must insist that it’s been a European film generation that we were relating to as much as an American, as there were filmmakers in the 70s like Francesco Rosi and a French director called Henri Verneuil who really did contribute very much to this genre and who had a strong influence on the filmmaking here.