BETWEEN THOUGHT AND EXPRESSION 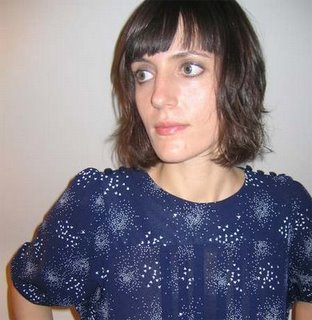 Okay, here’s a pull quote you won’t often get from me: this film is good for your soul. I’m referring to Astra Taylor’s Examined Life, which opens tomorrow at the IFC Center in New York and which is so engaging, hopeful and against-the-grain that it becomes a must-see cinematic tonic for these confusing times.

Examined Life is Taylor’s documentary about the related acts of thinking and walking. Using the history of mobile thought as her springboard (for more on this, read Rebecca Solnit’s Wanderlust), Taylor (pictured) follows eight philosophers as they stroll through their hometown environments engaging in a series of ethical dialogues about the act of living in this world. The film is heady but by no means dry. There’s abundant humor (the reliably entertaining Slavoj Žižek interrogates the environmental movement by stumbling through a trash heap), and real empathy throughout.

Nick Dawson interviews Taylor for this week’s Director Interview, and he hits on a perfect analogy for the film: it’s a concert doc.

Filmmaker: One of the analogies I was thinking about for the film was that of a concert film, and it struck me that there’s a certain resonance with films like The Last Waltz, which also showcases a series of great, virtuosic performances.

Taylor: Oh yeah, that’s neat. It’s interesting because The Last Waltz was the one film the producer from my previous film, Žižek!, made me watch. I do like the theatricality and formality of that film a lot. These walks in Examined Life are quite naturalistic but, obviously, they’re a total spectacle and the subjects speak to the camera, so I really liked playing with that. I don’t have any desire to portray something that seems authentic – in the sense of “Oh, they’ve forgotten the camera and now they’re being themselves” – and showing these people at home having a sandwich. That, to me, isn’t nearly as compelling as them staring into the camera and saying, “This is what I believe. This is my truth. This is where my conviction lies. This is me.” To me, that’s far more authentic, even though obviously there’s a six-person film crew and they’re completely aware that they’re being filmed. They were all very enthusiastic about the element of spectacle, that was something they all embraced readily. I expected that from Žižek, because I’d worked with him before and he has a great love of cinema, but everyone else shared this enthusiasm so that was a real pleasant surprise.

Finally, one big incentive to see the film at the IFC this week is the series of post-screening Q and A’s planned. You can be sure these conversations will be more stimulating than hearing answers to “what was the budget?” and “how much was improvised?”

Here’s the schedule of speakers:

See the trailer below.