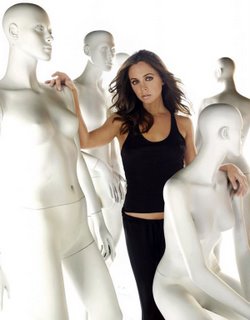 Here is an unexpected pairing: Dollhouse star Eliza Dushku and her Boston Diva Productions will team with doc director Ondi Timoner, who won the Sundance Doc Grand Jury Prize this year with We Live in Public, to make a biopic about the late photographer Robert Mapplethorpe.

Dushku has secured the exclusive rights and the full cooperation from Mapplethorpe’s estate and has enlisted two-time Sundance grand jury prize winner and indie darling Ondi Timoner (“DIG!”) to helm the film, which is titled “The Perfect Moment.”

Timoner’s Interloper Films and Dushku’s Boston Diva Prods. are producing the pic, which will chronicle Mapplethorpe’s career from his rise to fame in the 1970s for his portraits of socialites and rock stars until his death in 1989 at age 42 from complications arising from AIDS.

Documentarian Timoner, who will make her feature directorial debut on the project, called “The Perfect Moment” a dream film to make.

“He is an artist who could not help but express his vision of the world, despite the tempest it spawned,” Timoner said. “A pariah to some, a hero to others, Mapplethorpe’s talent combined with his irreverence toward social norms made him a cultural lightning rod.”

In addition to headlining and producing the Fox series, Dushku has formed Boston Diva Productions and is currently working on a movie based on the life of photographer Robert Mapplethorpe that will star her brother, actor Nate Dushku.

“I’ve been in this business for 15 years. I know how the machine operates,” she said about forming her production company. “Truly, at this point in my life, I’ve been working harder and I’ve been doing better work than I ever had in my life, and for a multitude of reasons, I’m good right now. I’m really good and I’m grateful.”