by Jason Guerrasio
in Filmmaking
on Mar 2, 2009 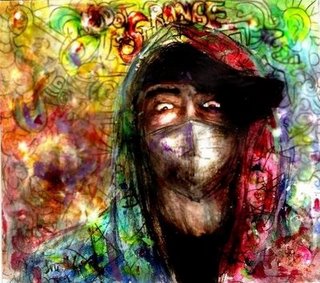 While in San Jose to attend the Cinequest Film Festival I got a chance to hang out with one of our more eccentric “25 New Faces” alumni, M dot Strange. The Bay-area native has been hard at work on his next feature animation project. He didn’t want to go too in depth about it with me, but if you’ve seen his first feature, We Are The Strange, you know it will stretch the limits of DIY filmmaking. One tidbit I can give out is the film’s score will be done by Endika, a San Jose musician who is a moving force behind the “Nu Class” movement, which stands for Neo Urban Classical Music and melds classical music with urban grooves, electronica and jazz. Below is Endika with his band, Panthelion, performing last weekend (M dot did the visuals).

In the mean time, M dot fans can get their fill with the shorts he’s been making, like this one, M.O.B.B., which he shot with a camera phone in one night. He says the inspiration came to him after the young girl featured in the short approached him and asked if he would film her inside a box. (Now that’s what I call a lead in!)