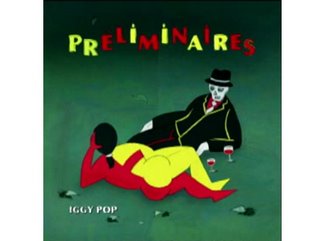 Via Pitchfork comes this unexpected but delightful news that Iggy Pop is making an album of New Orleans-styled jazz songs inspired by the French writer Michel Houellebecq’s quite excellent latest novel, The Possibility of an Island. Entitled Preliminaires, the album is an outgrowth of a songs Pop made for a documentary about the French author’s making of his novel into a film.

Pop has made a wonderful video trailer for the album, which can be seen here.

A bulletin sent out via the Stooges’ MySpace page says that Preliminaires is “NOT a rock album, more jazzy stuff.” In the trailer, Pop himself says “it’s a quieter album with some jazz overtones.”

Allow him to explain: “At one point, I just got sick of listening to idiot thugs with guitars banging out crappy music, and I was starting to listen to a lot of New Orleans-era Louis Armstrong, Jelly Roll Morton type of jazz. And I’ve always loved quieter ballads as well.” He also enthuses at length about the book c and shows his tiny white dog off to the camera.

The video ends with a song called “King of the Dogs”, which really is Iggy Pop singing about his “smelly rear” over a New Orleans jazz funeral march. Judging by that, this could easily be the best jazz album that a punk legend has ever made about a French novel.