The Forgiveness of Blood — A Hammer to Nail Review

The future of American independent filmmaking may not lie in America at all. In recent years, a number of filmmakers have turned their eyes away from the complexities of 21st century American life and toward the world beyond our national borders. The decision to engage another culture through filmmaking, to do the work to create a compelling and accurate (if fictional) representation of the lives of others, has come at a time when American culture seems to have deepened its inward gaze; with every push by artists seeking to give voice to the complexity of, say, Arab or Persian life (vital stories in the age of our engagements in the Middle East), there has been an apolitical pull among many filmmakers to put aside the divisive politics of our culture in favor of genre and/or personal filmmaking. Add to this the commercial challenges that continue to face most foreign language films and it becomes clear that when American filmmakers, and especially directors of fiction, take the plunge to tell stories from other cultures, their actions carry an extra, subversive power.

Joshua Marston has been at the vanguard of this movement; his 2004 film Maria Full Of Grace took the story of the American drug war to its Colombian roots, personalized it, and brought it back to our shores. In the years since its completion, American filmmakers have reached out to the world in new ways; think of Chris Smith’s lovely The Pool, Lee-Isaac Chung’s Munyurangabo or Alrick Brown’s recent Kinyarwanda as the natural heirs to Maria’s global standard. This year, after a seven-year absence, Marston has returned to feature directing with The Forgiveness Of Blood, a film that is in many ways a radical departure from Maria and a new benchmark for American international filmmaking. 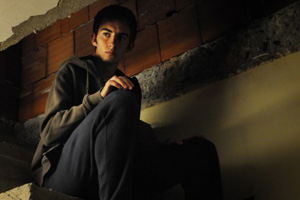 Set in rural Albania with a cast primarily made up of non-professional actors speaking in their native language, The Forgiveness Of Blood is the story of Nik (Tristan Halilaj) and his sister Rudina (Sindi Lacej), both teenagers and both stuck in a terrible position; in a fit of rage, their father has murdered one of their neighbors and subsequently gone into hiding. With blood on the family’s hands, the locals return to their cultural traditions, codified in what is called the “Besa,” a code of honor that contains within it an extrajudicial roadmap for revenge and the settling of blood feuds between families. As the aggrieved neighbors claim the right to take Nik’s life as payback for their own loss, Rudina must take on the role of provider, picking up the family’s diminishing bread delivery business and trying to make ends meet in the absence of her father.

Marston uses the teen’s alternate trajectories—Rudina’s economic empowerment as a woman and Nik’s growing isolation as a housebound target for revenge—to ratchet up the film’s intensity; as Nik looks for normalcy by sneaking away from his house during the night, the edges of the frame become filled with a quiet menace, danger lurking in the sound of footsteps or the passing of a car. Marston’s framing delivers chills, as he positions the careless, teenage Nik in front of windows and openings, always with the feeling that death is near. Rudina’s humiliations lie within her community, in the town that knows her family’s predicament and changes the rules of the game. But her challenges move her in the opposite direction of Nik, as she develops a sense of mastery of her trade that brings comfort to the family’s possibilities. 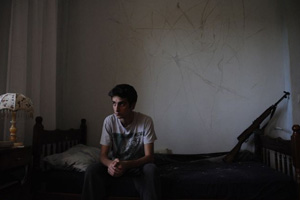 Marston’s film hangs upon the ethereal tensions that the Besa inspires; a set of rules and social constructions that seem at once foreign, ancient, immutable and deeply terrifying. What is most encouraging is that the filmmaking and storytelling more than deliver a sense of deeply felt connection to this community; if there were no credit sequence, no press notes, you would have no problem believing that there was an Albanian director at the helm of this film. That sense of authenticity—a problematic word, to be sure—is a testament to Marston’s research and his creative process, but also to his gifts as a filmmaker; his belief in the importance of his characters lives and their stories raises the stakes for the audience as well, creating a film that is both foreign and familiar, unlike any other recent film by an American director.

It is interesting to me that this movie, which premiered at Berlin and has now had its North American premiere at Telluride before screening at The Toronto Film Festival, for whatever reasons seems to have been pushed to the boundaries of our collective conversation. While Oscar season ramps up and Toronto heralds the arrival of a new batch of independent and studio films vying for awards consideration, there are several remarkable independent films from around the world bowing on festival screens, many of them brilliant, and many of them being relatively ignored. While that is symptomatic of this time of year, it is also a real shame; American cinephiles will likely find this film, but it is worrying that more is not being said about it. More than conversation, though, I am hoping The Forgiveness Of Blood provides inspiration, continuing the expansion of the American filmmaking community out from its cocoon and into the world around us.