This Is Not A Film — A Hammer to Nail Review

(This Is Not A Film begins a two-week engagement at Film Forum today, courtesy of Palisades Tartan. The movie will then open in other U.S. locations, starting with Los Angeles in early March. Go to the film’s website for details.)

For those unfamiliar with the backstory: Jafar Panahi, one of Iran’s most acclaimed directors (The White Balloon, The Circle, Crimson Gold, Offside), was arrested in 2009. A known supporter of the opposition movement, Panahi was charged with “activity against national security and propaganda activities against the regime.” Despite domestic and international outpourings of support, he was sentenced in 2010 to a six-year prison sentence and a 20-year ban on directing movies, writing screenplays, speaking to the press, or leaving the country—an exceedingly harsh sentence, but one reflective of the Iranian government’s post-2009 crackdown on free expression. Panahi continues to appeal his sentence, but faces the possibility that he may have to return to prison at any time.

This Is Not A Film, co-directed by Panahi and documentary filmmaker Mojtaba Mirtahmasb, was shot while Panahi was under house arrest and awaiting the results of his first appeal. In the opening scene, he invites his friend Mirtahmasb to come over and record him as he talks about a script he’d been hoping to shoot. Panahi is alone in his Tehran apartment that day, his wife and children having left to run errands related to the Persian New Year (Nowruz) festivities. Once Mirtahmasb arrives, Panahi walks us through his screenplay’s outline, and even begins to act out scenes in his living room. Suddenly he exclaims in frustration, “If we could tell a film, then why make a film?” and calls an end to it. He watches scenes from his earlier films on DVD while commiserating with Mirtahmasb about the problems Iranian filmmakers face. Eventually, Mirtahmasb departs, leaving his camera behind; Panahi picks it up to film a chance encounter with a young neighbor, a graduate student. The young man heads out into the streets, to watch the New Year’s fireworks and bonfires, but Panahi, unable to follow him, remains inside. 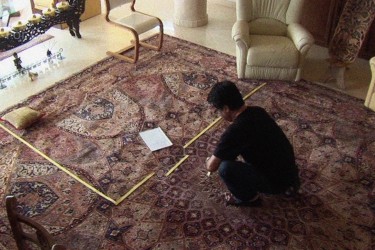 I’ve given away the entire “plot,” such as it is, in the preceding paragraph. But the surface events of This Is Not A Film only tell you part of the story. The movie presents itself as a seemingly artless video diary, merely a record of whatever random events happened to befall Panahi on that single day of his house arrest, when it is, in fact, a cunningly constructed post-modernist mind-bender in which nothing is accidental or arbitrary. So when you see it—which you most certainly should, as there probably won’t be a more formally inventive, politically urgent, intensely personal work of cinema playing on any screen this year—bring your X-ray specs and your secret decoder ring; be prepared to peer behind the curtain and read between the lines. And once you do so, the veil of allegory and metaphor partially lifts and glimmers of Panahi and Mirtahmasb’s true intentions come into view. You will note, for example, that nearly every scene can be understood as a symbolic commentary on Panahi’s own situation, or that of filmmakers in Iran, or that of Iranian society in general. (What is Panahi’s unfilmed screenplay about? Why does the movie end when and where it does?) And that this purported day-in-the-life documentary sketch is as carefully framed and art-directed as any filmed fiction. (Which unlikely DVD title is given prominence on Panahi’s shelf? What photos hang on the walls nearby as he talks about the prohibition against showing bare-headed women in Iranian movies? Whose faces do we see in the film, and whose don’t we see?) 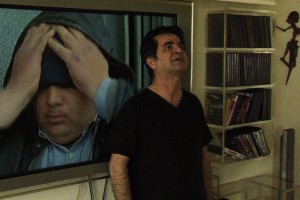 Panahi and Mirtahmasb write in the press notes, “Our problems are all our assets… The discerning nature of art not only paves the way for the artist to overcome problems, but in the process of creativity, it turns every limitation into a subject for work.” Out of the humblest and least promising of materials, the directors have crafted something rich, sad, funny, playful, pissed-off, smart, and slippery, a movie unlike any I’ve ever seen—and yet, a movie that’s also recognizably of a piece with other great achievements of contemporary Iranian art film (and with Panahi’s earlier work), in its blurring of the boundaries between fiction and documentary, its self-reflexive investigation of the nature and purpose of cinema, and its plainspoken but profound humanism.

This Is Not A Film was smuggled out of Iran on a flash drive hidden inside a cake, in time for a surprise screening at Cannes last year; it went on to triumphant showings at the London, New York, and Toronto film festivals. But Panahi is still unable to practice his vocation, to travel, or to speak freely. And last September, Mirtahmasb and five other documentary filmmakers were arrested, on charges of supplying aid to the Persian BBC network; Mirtahmasb was the last to be released from prison, after three months. Other filmmakers and artists remain under constant threat of censure, imprisonment, or worse. This is not just a film, but an ongoing story…