BRONSTEIN AND SAFDIE, STATESIDE AND ABROAD 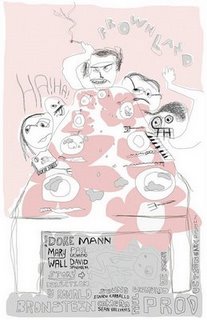 Earlier I posted about the screenings of Ronnie Bronstein’s Frownland and Josh Safdie’s The Pleasure of Being Robbed this weekend in Los Angeles. As Brandon Harris noted in a blog post below, Josh Safdie and his brother Benny are premiering their new title, Go Get Some Rosemary, at Director’s Fortnight in Cannes this year. That film stars Frownland‘s director, Bronstein. So, seeing their two films back to back this weekend is something of a stateside prep for their appearance along the Croissette.

Filmmaker contributor Mike Plante has just interviewed Bronstein over at his CineMad blog. Below, he talks about working with Safdie and the slow process of making his next movie:

Plante: Let’s make it clear that you haven’t just been sitting around doing nothing since you finished the film.

Bronstein: My process for my own work is painfully slow. I mean, it’s not something I’m embarrassed about. I work slowly, and I’m comfortable with that. The first sort of step, after the thematic scope of a project is mapped out, the first step for me is to create a central character who will become the anchor of the work. For instance, with FROWNLAND it took four months of heavy collaboration with Dore until Keith was alive and breathing, so I could sort of wind him up, and spin him around and toss him into any situation and he could respond in character. This new one is taking a little longer. I’ve been working for about seven months with this my lead. And now finally the character is there, he’s alive.

Plante: Right. In your new script?

Bronstein: Yeah, yeah, that’s right. But I did take a break to work on Josh and Bennie’s movie [The Safdie Brothers’ new GO GET SOME ROSEMARY, which Ronnie acts in and helped edit]. And I can see why people attach themselves to greater, higher infrastructures in their life. Why they get jobs that tell them where to be everyday, and why. It’s a true pleasure to be involved in something so creatively engaging and fulfilling and yet not have to steer the ship.

Like, I had my base sense of purpose, the reason to get out of bed, that was taken care of, without any of the angst and stress that comes with having to create your own infrastructure.

Once that movie was done, oh my God, it was like being punched in the gut. Terrible, man. I lost my wind.

Plante: Cause you had to go back to—

Bronstein: Waking up everyday and having those panic attacks.

Plante: There was no school schedule.

Bronstein: Oh my God, no. I don’t want to give the impression of lethargy.

Plante: Your general motivation was because you wanted to make a film. It’s just a matter of – you gotta do it your way.

Bronstein: Right, that’s right. I don’t know. What the product is is kind of secondary. I’m just looking for that sense of purpose, so I don’t feel like I’m flailing.