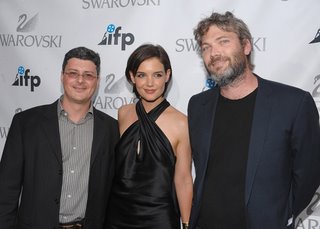 It was a really nice evening last night at the new Cooper Square Hotel where actress Katie Holmes hosted an IFP 30th Anniversary Spring Event. The event was co-chaired by producer Hunter Gray (Memorial Day, Zero Bridge, Momma’s Man, Half Nelson, pictured at right) and producer Anthony Bregman (Synecdoche, New York, Sleep Dealer, Friends with Money, and Shari Springer Berman and Robert Pulcini’s upcoming The Extra Man, which stars Holmes, pictured at left). In his remarks, Bregman talked about Holmes’s long history with independent and specialty films, including roles in The Ice Storm, Go, Thank You for Smoking and Pieces of April. I’d add to that her part in one challenging studio film, Wonder Boys, which is a movie that keeps getting better with time. Holmes was a gracious host and it was great of her to be part of an event that will support the IFP and all of its year-round programs. As for the evening, it started with a cocktails on the hotel’s spectacular roof deck and went until midnight with a crowd consisting of both long-time friends of the IFP as well as quite a few new supporters. Below are Holmes’ comments from the red carpet.

For more info on the IFP’s programs or to become a member (which also gets you a subscription to Filmmaker Magazine), visit its website. And to see an interview with Holmes on the red carpet, click here.