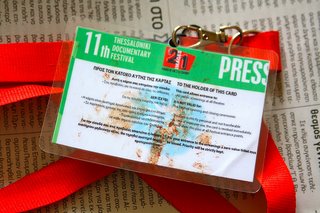 We all here at the magazine were stunned last month when Ray Pride contacted us from Greece, where he was covering the Thessaloniki Film Festival for us, to tell us that he’d been attacked by a mob just hours before. We were happy to hear from him and relieved that he came out of it, for the most part, with only minor injuries.

He recounts what went on that evening in a post over at Movie City Indie.

Along the eight blocks to [my friend’s] apartment, a square bristles with a crowd of middle-aged men listening to an energetic older man. A rank of blinding bright white lights stands between the speaker and the Byzantine edifice behind him. This is the square of Agia Sofia, the “Church of the Holy Wisdom.” It’s a neighborhood I know well; I feel safe. The words of his urgent peroration that I understand are mostly along the lines of “homeland” and “patriotism.” Riot police stand at the perimeter of the gathering. I have my DSLR camera with me, walk past without even framing a picture. I move along. “Homeland.” “Patriotism.”

Journalists watch, movie reviewers watch, photographers watch, used to seeing. Seeing without being seen, as well. I was about to get a simple lesson in observation. The speaker’s voice resounds through the shutters of the flat several blocks away. “Homeland. “Patriotism.” I take the same route half-an-hour later, 9:15, after dark. Observing, I reach toward my unzipped camera bag, more to protect its contents than to take out any equipment. Three, then four middle-aged men are abruptly in my face shouting in Greek, “Who are you?” “Who sent you?” “What are you doing?” I’m surrounded. I move to protect my bag as punches fly and fall.

Sloppy punches and kicks from a dozen men in a mob scrum are always to be preferred over two guys in an alley. If you get dragged free soon enough, it’s more roughing up than being beaten stupid. Still, there’s blood. The velocity of the event? Under two minutes, I would guess.

I was told later the men who kicked, swung, slapped, as I crouched on the ground to protect my face, might have taken me for “an anarchist infiltrator.” Fast, furious. Less than two minutes and about a pint of blood later, soaking my hair and cascading down the back of my jacket, police pull me away, to insure “bodily integrity,” as the term of art of Greek law has it. Adrenaline brings clarity. My upturned palms are covered with blood from the gash on the back of my head. I hold them up. “American… Journalist… NOT political. What do you need?” My fingerprints blood my press pass as I hand it across.