IFP WELCOMES OSCILLOSCOPE’S ADAM YAUCH TO ITS BOARD 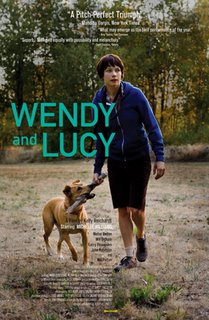 The Independent Filmmaker Project, which publishes this magazine, welcomed Oscilloscope founder Adam Yauch (also a member of the Beastie Boys) to its board of directors last night with a cocktail reception hosted by Deluxe Laboratories here in New York. The new Deluxe facility is stunning and the reception, which also marked the DVD release of Kelly Reichardt’s Wendy and Lucy, was followed by a screening of the film. Attendees included quite a few directors, including Oren Moverman, Todd Rohal, Ryan Fleck & Anna Boden, Ira Sachs, Jenny Livingston, as well as Yauch, the IFP’s Michelle Byrd, and Wendy and Lucy producer Anish Savjani. (Yauch, Byrd and Savjani are pictured below right.) 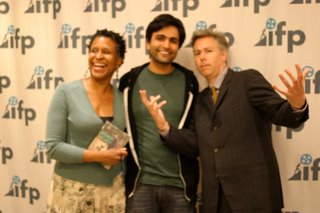 The event also offered me my first glimpse of Oscilloscope’s fantastic DVD packaging. Their gatefold DVD sleeves are made entirely from recycled paper and provide a pictorial experience not unlike the kind some of us once had when we’d buy a new vinyl LP. And, on the new Wendy and Lucy disk is a fantastic bonus feature. Instead of boring old EPK material, Reichardt has placed on the disk four experimental films by faculty colleagues at Bard. The films are Les LeVeque’s Flight; Peggy Ahwesh’s Scary Movie [aka Pistolary, The Star Eaters]; Jacqueline Goss’s Howdy Stranger; and Peter Hutton’s Boston Fire and New York Portrait.