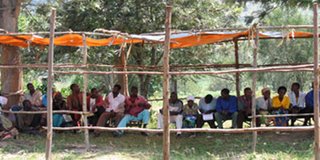 Premiering in Cannes in Un Certain Regard, Anne Aghion‘s penetrating and transfixing documentary, My Neighbor, My Killer, is the culmination of a decade-long filmmaking quest to address one of the most difficult questions facing citizens, communities, tribes, religious groups and ethnic factions around the world today: “Could you forgive the people who slaughtered your family?”

In 1994 hundreds of thousands of minority Tutsis were slaughtered by Rwanda’s Hutus, with villager killing fellow villager, cousin killing cousin. The Rwanda genocide has been well covered in the media, but less focused upon has been the Gacaca Tribunals, open air citizen hearings instituted in 2001 as a way for the Rwandan people to participate in a system of justice, achieve a sense of reconciliation and rebuild their nation. Beginning her project in 1999, Aghion set out to chronicle this aftermath, interviewing not politicians or human rights advocates but instead survivors as well as killers hailing from one small village, Gafumba. My Neighbor, My Killer is the product of repeated visits to this village throughout the course of the Gacaca process, and Aghion places the viewer directly within the social fabric of a community attempting to overcome an ineffable sorrow. There are no statistics cited in Aghion’s film, no talking heads, no Western commentators and no lower-thirded history lessons. The viewer is left to engage simply and directly with these subjects across the years it takes for the Gacaca to unfold.

My Neighbor, My Killer is the fourth film Aghion has made about the Gacaca but the first feature. It follows her doc trilogy of one-hours — Gacaca: Living Together in Rwanda?; In Rwanda We Say: the family that does not speak dies; and The Notebooks of Memory — that employ some of the same footage. But, as Aghion says below, My Neighbor, My Killer is the film she intended to make from the start, and its production was aided by the filmmaker’s ability to chronicle the Gacaca in these shorter works as the trials themselves unfolded.

I spoke to Aghion by phone the day she was due to leave for Cannes.

Filmmaker: Tell me about the genesis of the project and the relationship between the feature and the three preceding films. Was it always your plan to explore this topic in multiple works?

Aghion: I set out to work in Rwanda almost ten years ago, and the film you just saw is the film I set out to make. I wanted to make this film on the Gacaca, I realized it was going to take a long time, and over the course of that time I made two other films. It was about five years ago, after the second film, that the trials began, and I decided that I was going until the end. And then, last year with my editor, we made a third film in the trilogy, which is really for specialists.

Filmmaker: I sat on a Women in Film documentary panel the other day, and one audience member asked a question about her own documentary project. Like you, her intent is to make a feature doc, but she is interested in releasing shorter pieces using that same footage along the way. She’s worried, though, that she’s ruining the “premiere quality” of the material if she does so. Was this an issue for you? Were you worried about a conflict between the shorter, one-hour films and the eventual feature?

Aghion: As I was moving along, I felt the other films stood on their own, but also, I didn’t know where this was going to go, and I didn’t know if I was going to last for ten years. I didn’t even know it was going to be ten years! And frankly I wouldn’t have been able to fund this one if I hadn’t made the previous ones, if I hadn’t gotten funding and some attention during the process. And now today I have this enormous archive, 350 hours of extraordinary footage, which is a historical record on some level of the trials in that little community, and I hope to be able to do something [different] with that. I’ve approached people to have it preserved and made available to researchers.

Filmmaker: Is there a difference in the formal approach of the feature as compared to the other films?

Aghion: For me, the feature ties all the knots. We tried to build it as close as possible to a narrative [structure] — to tie all the knots and finish the story. In the feature, it’s like every image, every shot has a function, which was not true in the shorter ones. We made those faster, but this one, my editor and I edited the film for a year. We took our time, we worked with no outside pressure, just the two of us, which had its pluses and minuses. We made the film I wanted to make, but we had no one to guide us when we were lost. There is a point at which just showing it to people who are not completely involved in the film doesn’t do the trick. It does part of the trick, but having a third person involved in the process would have been very helpful.

Aghion: Yes, and this one my editor and I did without a producer.

Filmmaker: How have the films been received in Rwanda? Have you shown them there?

Aghion: One of the things I am really happy about and proud of is that these films are embraced by Rwandans. [The films are seen as] succeeding in conveying what it is like there. That’s very important to me. And with the exception of this one [which premieres in Cannes], the first audiences have always been in Rwanda — in Kigali, first, to clear the air, and then in the village. I really worked hard for the films to be shown there, and it took a while to get authorization. I get a mobile cinema and go up there [to the village] and show the film. I remember when I showed the first one in Rwanda, a very high-level military guy said, “It’s funny, it’s always foreigners who tell us how it is here.” “Is this a good comment or a bad comment?” I asked. He said it was good. You try to act as a mirror for the people whose lives you are depicting, and it’s gratifying when it works.

Filmmaker: What sort of audiences see the films in Rwanda?

Aghion: Well, the second film focuses on the return of [one suspect] from prison — it is all about his return to the community — and that film was shown to 30,000 or 40,000 prisoners throughout Rwanda as an example of what they might expect to find when they return home. They were terrified they’d be terrorized or killed if they came home to their communities, and his story was an example of “it’s not going to be easy, it’s going to be hard, but you’re going to live.” It was extremely gratifying that we were able to show the film. Also, I feel like I didn’t make concessions as to what I was saying, and the film was still embraced.

Filmmaker: So the film can have a healing function for its subjects?

Aghion: I think that the process of filmmaking if it’s done slowly and carefully can actually help in the healing process for the reason I mentioned — the mirror effect. You are able to see through somebody else’s eyes and the camera’s eyes, and it makes you reflect upon things in ways that might not have occurred [otherwise]. That’s another reason [I was able to film] – I think [the subjects] got something out of it. But there were days when they were like, “Get out of here!”

Filmmaker: I have to say, one thing I took away from your film was a sense of overwhelming sorrow. Several of the women interviewed, the ones who have lost their entire families and seem spiritually broken, I had to wonder how the film and even the Gacaca process could help them.

Aghion: People in Rwanda including people in the film acknowledge that there is a lost generation. With all their disillusionment and resignation they still go through with it because they think maybe it will help future generations.

Filmmaker: One thing I liked about the film was how un-intrusive your hand as a filmmaker was. The film seems genuinely attuned to the life and the rhythms of the village. This effect was partly generated for me by your avoidance or only minimal use of dramatic scoring, voiceover, title cards, and the usual third-person devices that convey information in docs. The side effect of this choice is that it can be hard as a viewer not overly familiar with the history to grasp the immediate context or historical chronology of some of the events.

Aghion: It was a choice from the beginning to not include any context, to try and build the film so that you [are given] just enough in order to understand it, to get it. In order to have the emotional experience you get while watching the film, I don’t think you can have that context — or, I don’t know how to put it there. Had there been context it would have taken away from the emotional impact. But you can show this film to someone in Tehran or Chechnya or Israel or Palestine and they’re going to get it. You don’t need to know what happened in Rwanda. It would detract from it. Why reduce it to just Rwanda? I want people to know is that [this story] is relevant beyond Rwanda, and I think this film demonstrates that.