THOMAS PYNCHON IN A ’60S KIND OF WAY 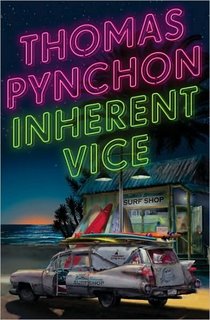 I stopped by St. Mark’s Bookshop this afternoon and noted that they are remaining open past midnight on Monday, August 3 (until 12:30) to sell copies of the new Thomas Pynchon novel, Inherent Vice, which goes on sale Tuesday. This new Pynchon has snuck up on me — I knew it was coming out but I hadn’t realized so soon. So, Googling I come across the cover, which at first I thought was a joke. It’s got a real Elmore Leonard ’80s design thing going on, or maybe a Carl Hiassen vibe, or, less charitably, as a poster on at The Decider wrote, it looks like Pynchon is taking a trip to Margaritaville. Galleys were apparently floating around the launch party for Granta 107, where Salman Rushdie remembered a dinner he once had with the publicity-shy author. But what about the book? According to this publicity blurb, it seems really reminiscent of the Coen Brothers’ The Big Lebowski.

It’s been awhile since Doc Sportello has seen his ex-girlfriend. Suddenly out of nowhere she shows up with a story about a plot to kidnap a billionaire land developer whom she just happens to be in love with. Easy for her to say. It’s the tail end of the psychedelic sixties in L.A., and Doc knows that “love” is another of those words going around at the moment, like “trip” or “groovy,” except that this one usually leads to trouble. Despite which he soon finds himself drawn into a bizarre tangle of motives and passions whose cast of characters includes surfers, hustlers, dopers and rockers, a murderous loan shark, a tenor sax player working undercover, an ex-con with a swastika tattoo and a fondness for Ethel Merman, and a mysterious entity known as the Golden Fang, which may only be a tax dodge set up by some dentists.

In this lively yarn, Thomas Pynchon, working in an unaccustomed genre, provides a classic illustration of the principle that if you can remember the sixties, you weren’t there…or…if you were there, then you…or, wait, is it…

And the folks at ThomasPynchon.com, who I do not think include Thomas Pynchon, have what they say is the first page. It begins:

She came along the alley and up the back steps the way she always used to. Doc hadn’t seen her for over a year. Nobody had. Back then it was always sandals, bottom half a flower-print bikini, faded Country Joe & the Fish t-shirt. Tonight she was all in flatland gear, hair a lot shorter than he remembered, looking just like she swore she’d never look.

‘Just the new package I guess.’

There is more at the link.