by Nicholas Rombes
in Columns, Filmmaking
on Mar 19, 2012

1. This is the first time that Frank, Dorothy, and Jeffrey appear together in the same frame.

3. The ratings for “Mister Rogers’ Neighborhood” peaked in 1985, the year before Blue Velvet was released.

4. It’s not only Frank’s eyes that terrify, but his voice, tinged with sarcasm, delivered in Dennis Hopper’s flat, Midwestern accent. And then, buried in the soundtrack, there’s a low, faint rumbling, like the sound of thunder arriving from hundreds of miles away, having crossed vast, empty fields.

5. John Belton, from his essay “Technology and Aesthetics of Film Sound”:

What the sound track seeks to duplicate is the sound of an image, not that of the world. The evolution of sound technology and, again, that of studio recording, editing, and mixing practice illustrate, to some degree, the quest for a sound track that captures an idealized reality, a world carefully filtered to eliminate sounds that fall outside of understanding or significance; every sound must signify.

6. It’s as if the three of them are standing around a soft light, emanating from the floor.

7. “Life is made of slowly composed horrors.” From the novel How the Dead Live, by Derek Raymond.

8. Moments after the this frame, Raymond (Brad Dourif, who played Billy Bibbit in One Few Over the Cuckoo’s Nest) is summoned by Frank to stand watch at Dorothy’s apartment door as she retrieves her robe to go to Ben’s.

9. In 1971, Andy Warhol made this portrait Dennis Hopper, his face shaded with blue: 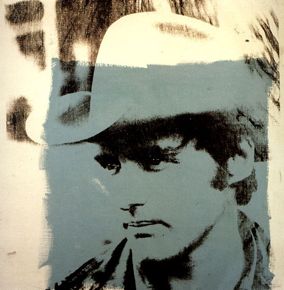 10. Frank constitutes the frame. His presence disrupts the concept of the vanishing point, as he deforms perspective so that all lines of sight tend toward him.

11. The ending of Louise Glück’s poem “Witchgrass” suggests a totalitarian vision that may as well be Frank’s:

I was not meant
to last forever in the real world.
But why admit that, when you can go on
doing what you always do,
mourning and laying blame,
always the two together.

I don’t need your praise
to survive. I was here first,
before you were here, before
you ever planted a garden.
And I’ll be here when only the sun and moon
are left, and the sea, and the wide field.

I will constitute the field.