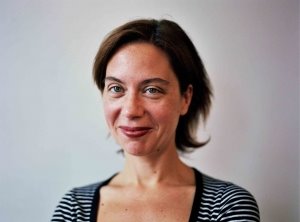 In “A Filmmaker’s Glamorous Life,” online and in our latest print edition, Esther Robinson surveyed a number of filmmakers about the jobs they’ve taken to support themselves when they are not making films. In this blog series we’ll run the unedited responses we received that were then condensed for the piece. Below: Liza Johnson.

I work as an art professor, teaching film and video at an undergraduate college. I’ve made a bunch of short films and video art exhibitions during the time I’ve taught there. In important structural ways, the job has been very supportive — you always get summer off, and making films is supposed to be the “research” part of my professorship, so in that sense it’s actually part of doing my job for me to make new work. The job I have now has also frequently been able to make small grants to me through different research funds which I have been able to use directly towards my production expenses.

It is a little bit trickier with the feature I’m doing now, because my job and the feature can both be logistically intense. I’m lucky because the deans and the administration are being really flexible about letting me take a sabbatical in a way that aligns with my production schedule. And that is gracious on their part, because the film schedule and the academic calendar have NOTHING in common — the school plans way in advance and the demands of the film are very immediate and contingent.

It feels like a privilege to have meaningful work (though of course you could argue that it’s something we all deserve). I really like teaching people about art, film, and ideas, and so obviously it’s great to be able to get paid for it and have health insurance, etc. For me it is MOSTLY relaxing to have a steady income and job security, so I get a lot more work done than when I freelanced. I always worried a lot about what the next job would be, and now I don’t have to spend time getting my next job. Since I don’t have to take risks about earning money, I feel like I can take more creative risks.

Having meaningful work also has some down sides. Being a professor can really become your whole identity if you want it to. Everybody in my workplace takes our work home with us a lot, and sometimes the intensity of our internal faculty conversations can really take up a lot of time. Since they already made a movie of Who’s Afraid of Virginia Woolf, it’s not even useful material for future work — it’s just an unfortunate side effect!

There are some down sides to the security, too. I literally have a cemetery plot in the faculty cemetery that came with my tenure. I’m not kidding!

Liza Johnson is an artist and filmmaker. Her work has been exhibited internationally in museums, galleries, and film festivals, including the Wexner Center for the Arts, the Walker Art Center, and the Centre Pompidou, as well as the New York, Berlin, and Rotterdam Film Festivals, among many others. She has been a fellow of the DAAD Berliner Kunstlerprogramm and the Sundance Institute. More information about her work is available online at www.lizajohnson.net.