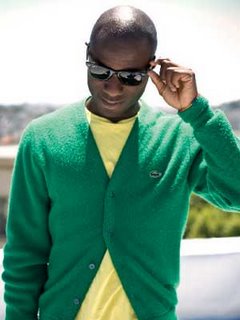 In “A Filmmaker’s Glamorous Life,” online and in our latest print edition, Esther Robinson surveyed a number of filmmakers about the jobs they’ve taken to support themselves when they are not making films. In this blog series we’ll run the unedited responses we received that were then condensed for the piece. Below: Barry Jenkins.

Jenkins: I had this job at Banana Republic that was more or less essential to getting my last movie done. Was a great job, I was the shipment supervisor at the largest Banana Republic in the world, which meant rising at 4:30am to be at work for a 5:30am job. We unloaded a truck every morning and unpacked the new product across long, rectangular tables. They were very understanding about me taking time off to make the film; in fact, several people I worked with there are in the film, another shot the still that became the poster. To stay afloat, I even picked up a few shifts while we were in production. Super understanding.

Jenkins: My previous job had been as an assistant in LA, and working around non-film people every morning on this job, getting the muscles going, having a dialogue with real people and not about “projects” was a great way to start the day, open up the brain and get some positive energy going. I’d be up and engaged to start the day, then I’d get off work around noon and ride to a cafe and write. Rather than being an assistant and working on someone else’s material — and being creative in the service of someone else — that part of my mind was kept fresh and preserved for my own material.

Jenkins: This job was it, not even close.

Jenkins: The fact that it was totally unrelated to filmmaking was a definite plus, something that took me by surprise. The people I worked with at Banana were so diverse across class, ethnic, educational backgrounds, going into that place was always a chance to connect to an experience totally unrelated to my own. It made me a better a listener, which is one of the most essential skills to cultivate for a filmmaker.

Filmmaker: What is the worst?

Jenkins: Being a Hollywood assistant.

Jenkins: The job itself was not bad; I’d say the experience I gained seeing that side of the filmmaking process from an insider’s point of view was crucial to navigating the opportunities available to me now. But a job like that demands so much of your energy, sometimes even your passion, that there’s little left to direct towards your own work. On the surface, it seems like the perfect scenario: aspiring filmmaker gets hired to follow and observe a working director, producer, writer, whatever. Really though, if you’re working for someone else in the same field how can you simultaneously be working for yourself? When I decided to leave, the people I worked for (Darnell Martin and subsequently Harpo Films) were supportive of the move because they wanted me to realize my own work. I made a lot more money working at Harpo, but a few more movies working at Banana =)

Jenkins: The goal is to not have a second job. This is my craft; I’m employable. Even more to the point, I’m self-employable. We should all view ourselves this way, DIY or whatever. So many companies, organizations and even individuals need content, and these films us “little guys and gals” are making are proof that we can create it. I just worked with these guys at Last Pictures and they have an AMAZING system and they just graduated from NYU undergrad a month ago! These guys are 21, 22 years old and they’re hiring me for jobs; for them the notion of a “second job” doesn’t make sense. I turn 30 this year but I’m trying to follow in those cats’ footsteps. That’s what’s up!

Barry Jenkins is a writer/director living in San Francisco. His recent or current projects include the feature film Medicine for Melancholy and the recently completed shorts Tall Enough and A Young Couple.