FROM ROBERT FRANK TO JEM COHEN TO… GOOGLE 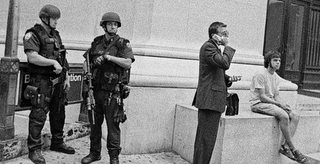 After seeing Jem Cohen’s excellent historical reverie/political essay/performance documentary/poetic image symphony Empires of Tin at the IFC Center the other night, I’ve been thinking about street photography. Cohen’s practice has always involved a vaguely melancholy and Sebaldian filmic extension of the work of great street photographers like Robert Frank. In Empires of Tin, the kind of people typically captured by the street photographer (more, perhaps, Cartier-Bresson than a skeptic like Frank) are less caught in meaningfully decisive moments as they are announced as anonymous everymen, markers of history or, perhaps, poetic ciphers. Wall Street workers drifting down those sad streets post-9/11. Service workers returning home at night, or neighborhood transients lingering around buildings either half-demolished or half-built. Buildings in fact may be the real stars — monumental buildings, wrapped buildings, buildings in decay or, perhaps, unchanged over centuries. Insides of buildings, like the sarcophagi of Vienna’s Imperial Crypt. In Empire of Tin, images flickered on a giant screen behind a stage full of musicians (members of Silver Mt. Zion, Vic Chestnutt, T. Criffin, and others) while texts from Joseph Roth’s Radetzky March were read. Often Cohen punched directly into this hypnotic footage, which he had pulled for this work commissioned by the Venice Viennale from his vast archive of street filming compiled over the years. Although he started the evening by claiming “I don’t know what this is,” Cohen, writing earlier in his notes, called it a “documentary musical hallucination,” and that sounds about right.

I won’t write more for two reasons. The first is that I, like Jim Jarmusch, who hosted the Q and A after, find it hard to say much about Cohen’s work so soon after seeing it. To zero in on Empire of Tin‘s political messaging, its evocation of empire and statement about the cyclicality of history, seems like a reductive act. “I don’t know what I’m saying,” Jarmusch would often say after spinning out a tantalizing half-sentence about why the film moved him, and I feel the same way. The second is that after writing about a half a blog post I came across Karina Longworth’s piece, which started with the same quote (Cohen’s “I don’t know what this is”) and ended with the same paraphrase (Jarmusch’s remembrance of something Jack Kerouac had written about Robert Frank: “And then he just reached out with his little camera and sucked a poem right out of the air”). So, enough from me, then; click over to Spout for Karina’s more detailed account of the evening. Or, visit here at Filmmaker for Mike Plante’s evocative take on the DVD:

Images come from present day NYC and from archives of the Austrian-Hungarian empire and WWI. Parallels between that declined world and ours are obvious, but never feel forced. First part of the DVD combines footage of the live performance (shot high quality, with great sound) intercut with the powerful images that were projected above them. The band is captured in a smart way, realizing the musicians as a vivid image, in color in front of the stark B&W. A second part of the film in the middle feels more like a film, color images with some more natural sounds and less images of the orchestra. Jem’s camera catches everyday life moments that resonate, like a strange man behind a chain fence talking to us, but with the sound of a empty street instead of dialogue. Unfinished architecture has its plastic wings whip in the breeze. Cars on freeway aas if they were blood pulsing through city. A third section of the film is like the first, striking city portraits and full accompaniment by the band. 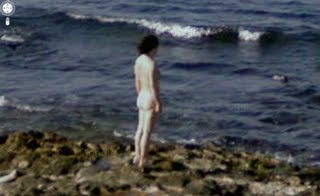 One year ago, I started collecting screen captures of Google Street Views from a range of Street View blogs and through my own hunting. This essay illustrates how my Street View collections reflect the excitement of exploring this new, virtual world. The world captured by Google appears to be more truthful and more transparent because of the weight accorded to external reality, the perception of a neutral, unbiased recording, and even the vastness of the project. At the same time, I acknowledge that this way of photographing creates a cultural text like any other, a structured and structuring space whose codes and meaning the artist and the curator of the images can assist in constructing or deciphering.

This very way of recording our world, this tension between an automated camera and a human who seeks meaning, reflects our modern experience. As social beings we want to matter and we want to matter to someone, we want to count and be counted, but loneliness and anonymity are more often our plight.

And, finally, this passage, which speaks to the necessary role of the artist/curator sifting through Google Street View, a comment that made me think of Cohen heading to his storage vaults, a ticket to Vienna in his pocket and Roth’s texts on his brain: 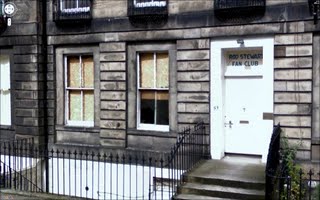 The collections of Street Views both celebrate and critique the current world. To deny Google’s power over framing our perceptions would be delusional, but the curator, in seeking out frames within these frames, reminds us of our humanity. The artist/curator, in reasserting the significance of the human gaze within Street View, recognizes the pain and disempowerment in being declared insignificant. The artist/curator challenges Google’s imperial claims and questions the company’s right to be the only one framing our cognitions and perceptions.

Read all of Rafman’s essay here, and buy Cohen’s DVD at Constellation.