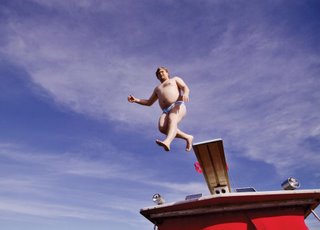 When I initially talked with producer Jake Abraham about contributing a piece to our Web Exclusives section about his DIY distribution of Kirt Gunn’s Lovely by Surprise, I told him I wanted it to be a two-parter. I wanted him to check back after the release had time to prove itself and let us know how it all worked out. Well, as Abraham notes in the intro to his just-posted new piece, “Tweet This!”, that time has come sooner rather than later. In brief, Abraham was compelled to write when he discovered that the film he’s been tirelessly promoting has been uploaded in decent quality to a filesharing site.

What’s so surprising, you ask? Studios deal with this routinely. The music industry has had to totally change its business model on account of the pirates. Did Abraham honestly think that his film wouldn’t at some point be uploaded?

While I consider myself “piracy agnostic,” and while we have certainly explored both sides of the issue here at Filmmaker (see, for example, this 2004 article by Jeff Levy-Hinte entitled “The Digital Divide”), I do empathize with Abraham. In the piece he talks about how he has been both thrilled to discover that his producing work has been pirated as well as depressed. I’ve had the same experiences. Once I travelled to Sarajevo as a guest of the Sarajevo Film Festival. A Bosnian teenager came up to me and asked if I had produced Gummo because it was one of his favorite films. How did he see it, I asked, knowing the film’s distribution in Eastern Europe was very limited. Oh, he bought a bootleg copy. Cool, I thought. Gummo had a big distributor, this was years after the film’s theatrical release, and I was just happy people were seeing the movie.

A decade or so later I produced another movie I liked a lot that struggled to break $1 million at the box office despite really good reviews. I remember meeting the girlfriend of a family member who told me that all her friends had seen the movie and loved it. Oh, at the Angelika, I asked? No, she said. They all downloaded it.

Whether or not there was a causal connection here (i.e., would these downloaders have otherwise been paying ticket buyers?), as a producer I couldn’t help but equate the box-office weakness of the film to piracy after hearing this anecdote. After all, this conversation wasn’t happening years after the theatrical release but during it.

Nonetheless,, I am piracy agnostic because I believe that with regards to the filesharing distribution of films, you can’t put the genie back into the bottle. My interests are in things like filmmakers using BitTorrent to distribute their films, or ways in which filmmakers can enlist existing pirate networks in the monetization of their titles. But Abraham’s piece has caused me to wonder a little glumly whether or not indie films are being hit disproportionately by piracy. Another anecdote. I was in Europe over the summer and had dinner with a friend and her family. My friend works in the film industry and also enforces a strict internet policing policy on her teen daughters. However, when it came to Twilight, which opened two months later in there than the U.S., she succumbed to the pleas of her daughters and let them download the film before its theatrical release. One of the girls told me that she didn’t like it, and neither did any of her friends. Did they ever see it again, I asked? Oh, sure, she said. They all paid to see it on release, and in the theaters they liked it a lot. The picture and sound were a lot better, she said, and it just played differently on the big screen than it did in a bad ripped copy on a laptop.

So, with piracy as many people’s cinema sampler of choice, do independent films have the marketplace muscle, the advertising power, the availability within the theatrical landscape to turn illegal downloaders into paid customers like the teens I knew who still ponied up for Twilight? Or without the drumbeat of the major media reinforcing the value of a film, does the downloader of an indie feature just check it out and move on to another title? Should we even care?

I don’t have the answers, but for now, check out Abraham’s thoughts on the subject.