A Separation, Bermuda, Footnote, Hysteria, Where Do We Go Now? 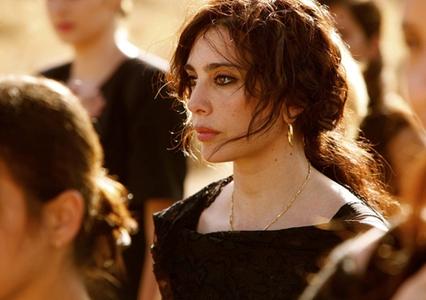 “Location, location, location” could very well serve as the tagline for the Bermuda International Film Festival. Set on a paradise island surrounded by spectacular pink sand and Technicolor-blue waters in the North Atlantic, it’s only a couple hours’ plane trip from NYC (or less if you can hitch a ride with the private-jetting Mayor Mike). This gracious and warmly welcoming fest – a reflection of the country’s unbelievably gregarious and helpful population (pull out a map and you’re just as likely to have a total stranger walk you to your destination as point the way) – is now in its 15th year yet exhibits the vitality of a young up-and-comer. Due to an economic crunch that nearly wiped out the 2012 edition, this BIFF was a scaled down version of former incarnations that still managed to screen over 80 flicks from around the world, mostly in a single venue (the Liberty Theatre, a nondescript cinema a few minutes walk from Front Street, the capital of Hamilton’s hopping main drag). And like the smartest, most tenacious indie producer routinely prove, size matters less than passion and the will to make every dollar – yes, this British protectorate conveniently accepts American currency – count.

Throughout my week covering BIFF I was constantly reminded of something my colleague Brandon Harris had once written about another stellar boutique fest, Tucson’s Loft Film Festival: that it wasn’t “going out of its way to become something (most festivals, like the ambitious people who run them, are hardly ever satisfied with what they actually are). It is something.” While many of the features selected (a great deal distributed by Sony Pictures Classics) arrived with the cache of Cannes or Best Foreign Language Film nominations at the 2012 Oscars (the lineup including the well-deserved winner, Asghar Farhadi’s A Separation) attached, BIFF wasn’t dressed to impress. The festival team’s goal seemed simply to bring the cinematic best to a vibrant movie-loving community that otherwise might never get to experience something like Wim Wenders’ Pina in 3D. (With a total population of around 65,000 this island country is hardly a major market.)

And while I’d already seen – and in many cases written about – over half a dozen of the features playing, I was excited to finally be able to catch several films that had inevitably slipped through my screening schedule cracks. Of the features, Nadine Labaki’s Where Do We Go Now?, which played New Directors/New Films in NYC the very same evening, was well worth pulling myself away from my beachfront accommodations. (And that’s saying a lot. This year press stayed at the Coral Beach Club, a charming Truman-era time capsule with tennis courts, proper staff in ties and Bermuda shorts, and tea served promptly at four. Indeed, Bogey and Bacall would have fit in nicely at the bar.)

Since I hadn’t seen Labaki’s previous film Caramel I had no idea what to expect from the Lebanese music video director. But it certainly wasn’t this smart crowd pleaser that wrestles with grave issues in an inventively palatable way. Where Do We Go Now?(pictured above) is one part Bollywood musical with shades of West Side Story (substitute Christians and Muslims for whites and Puerto Ricans), one part broad (literally – the film follows a tiny village’s womenfolk as they cook up zany schemes to keep their men from fighting a holy war) Brit-style comedy and one part heavy drama. It’s a tough balancing act – which Labaki navigates with startling aplomb. (Not to mention some of the script’s lines are laugh-out-loud hilarious. “Our smallest pair of boobs could feed half of Ukraine,” chides one zaftig local as she sizes up the Ukrainian strippers the women have hired for the week. Now I just need the lyrics to that song about hash cookies.)

Another crowd pleaser – this one an actual U.K. romantic comedy inspired by true events – arrived in the form of Tanya Wexler’s Hysteria, the sold-out closing night flick starring Hugh Gra – uh, Dancy! – as Mortimer Granville, the doctor who accidentally invented the vibrator. am-packed with double entendres and shots of Maggie Gyllenhaal dressed like Mary Poppins, it’s predictable popcorn fare and not my cup of English tea (save for a brilliant Rupert Everett as Granville’s sidekick, who I only wish was in every scene). Nonetheless, Hysteria ranked a close second to Jon Shenk’s The Island President, which with its closer-to-home, environmental topic nabbed the Audience Choice Award.

Interestingly, the programmers paired two homegrown docs dealing with different issues specific to Bermuda, the first a visually entrancing short by Bermudan Kristen Alexander that could just as easily have played before The Island President. A talking head in Alexander’s Trusting Rain calls Bermuda the “most densely populated oceanic island on the planet” – and a country at the forefront of a global water shortage. Bermudans, however, have a particular affinity for conservation since they’ve been using the fascinating method of harvesting rainwater for hundreds of years. Bermudan Lucinda Spurling’s Poverty In Paradise: The Price We Pay similarly presents another little known aspect of Bermudan society, that of its single (black) mothers – over half of whom are living in poverty. More primer and call to action than a cinematic experience Spurling’s doc nevertheless manages to shed light on a subject not found in any tourist brochures.

The flip side of Bermuda’s “Fantasy Island” face reveals a population priced out of even the cheapest housing. (When the economic industry surpassed tourism in the early ’90s the result mirrored the Wall Street takeover of Manhattan’s rental market.) Add to that the inordinately expensive cost of food (this vegetarian nearly went broke in a week with fruits and veggies more than double stateside prices) and the fact that Bermuda’s health care system is pretty much broken and you’ve got a recipe for disaster. (Not to mention Bermuda still has debtors’ prisons due to an 1800 law that remains in effect!) The warning not to wander around the Liberty Theatre area alone after dark suddenly made sense once I learned that Bermuda has a violent crime rate ten times that of the U.S. For all its heartfelt charm the country is in many ways still an economic and racially segregated society – closer in spirit to Bloomberg’s hometown of Boston than to the melting pot of NYC. Indeed, for a country with a majority black population the BIFF audience seemed unusually white.

Of the narrative features, Joseph Cedar’s Footnote presented its own shocker of a much different sort – if only for this film critic who once devoted an entire column to my Israeli obsession, Lior Ashkenazi, Judaism’s heartthrob answer to Daniel Craig. Israel’s 2012 Oscar entry for Best Foreign Language Film, the cliché-ridden, eager-to-please Footnote is set in the cutthroat world of academia and focuses on two frumpy professors, competing Talmudic scholars who happen to be father and – Lior Ashkenazi? In all fairness, Ashkenazi has pulled a “Russell Crowe in Inside Man,” and is both unrecognizable in his Zizek getup, and the best and only nuanced element of this Hollywood wannabe. (I’m still waiting for the studios to snatch him up.)

Yet even the most ridiculous, over-the-top antics in Footnote were preferable to Cannes darling Nuri Bilge Ceylan’s Once Upon A Time In Anatolia, an existential search for the meaning of life in modern day Turkey disguised as a hunt for a dead body, which left me cold from its sterile wide shots and tedious caricatures. I actually walked out of this self-conscious exercise in aesthetics at around the two-hour mark, just as the characters’ “secrets” were being revealed. (That was about the moment when I realized that since I couldn’t care less about Anatolia’s law enforcement men on a mission, any of their revelations would be inconsequential to me.) And I wasn’t alone. Regardless of its Grand Jury Prize at Cannes 2011 imprimatur, Bermudan cinephiles I queried called Ceylan’s film everything from “too long” to “dreary.”

Another dud was Michael R. Roskam’s Bullhead, Belgium’s unfortunate – or rather “unforgivable” considering the Dardennes’ latest masterwork – Oscar entry this year about a steroid-addicted farmer embroiled in the shady underworld of hormone-enhanced cows, and shot by a director juiced up on too many Tarantino and Guy Ritchie flicks. I felt similarly worn out by most of the shorts, though Afarin Eghbal’s Abuelas, a doc that presents the story of the grandmothers of Argentina’s disappeared through dynamic and whimsical animation, was a rare standout. That being said, many of the short films were only screened privately for the awards jury so I didn’t have the opportunity to catch Victor Carrey’s La Huida (The Runaway), which took top honors. (Thus making it eligible for the Short Film (Live Action) Oscar – as BIFF is one of the 62 Academy Award qualifying fests.)

Before the awards were finally announced, closing night jury member Michael Frith, a Bermudan best known for being the creative force behind many of Jim Henson’s most memorable Muppets, treated us to a lovely anecdote about his first movie experience at what is now the Specialty Cinema. (This quaint art-house also hosted all the panel discussions this year, including the one on film journalism in the 21st century titled “Making Headlines” that I participated in, and which thankfully avoided any Mayan-dire predictions.) With a twinkle in his eye the veteran puppeteer told of leaping from his seat and dashing out the door terrified the moment the MGM lion roared. For Frith, co-creator of “Fraggle Rock,” which was inspired by Bermuda’s Crystal Caves, the magic of cinema and his paradise homeland will be forever intertwined.