Crowded Marketplace: How the JOBS Act Will Transform Film Financing 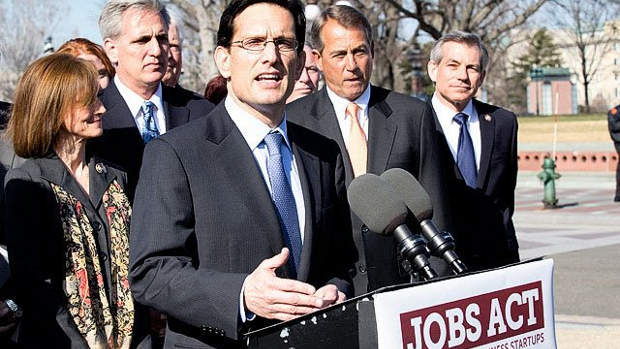 In one of the most widely watched and significant developments in film finance in some time, Congress passed the Jumpstart Our Business Startups Act (the “JOBS Act”) in late March. President Obama, who has pledged his support of the bill, is expected to sign it into law in the coming days — most likely by the time you read this article. The passage of the JOBS Act represents a watershed moment for small companies seeking access to capital markets, and it has the capacity to revolutionize the ways independent producers finance their films.

Overview of the Law

Surprise, surprise. A new piece of legislation from Congress is highly technical, complex, and virtually incomprehensible to anyone other than its authors. To simplify things, the JOBS Act contains two features that significantly impact film producers: (1) in certain cases, producers may now make a “general solicitation” to accredited investors, such as high net-worth individuals and institutional investors; and (2) the passage of the Capital Raising Online While Deterring Fraud and Unethical Non-Disclosure Act of 2012 (the “CROWDFUND Act”), which facilitates fundraising in small amounts as further described below.

Sorry to bore you with the complexities of U.S. securities law, but context is important here. Bear with us for a few paragraphs and we’ll get to the interesting stuff.

Under the Securities Act of 1933 (the “Act”), any offer to sell a security — which includes a passive profit interest in a film — requires that the security either be registered with the Securities and Exchange Commission (“SEC”) or be exempt from registration. Because registration of a film investment as a public offering is time consuming, expensive and impractical, producers generally rely on an exemption (i.e., Section 504, 505, or 506 of the Act) to raise equity investments in their projects. Each of these exemptions entails a number of requirements, such as comprehensive and detailed disclosures, and restrictions, including a prohibition on general solicitation of the investment opportunity.

The JOBS Act has eliminated the ban on “general solicitation” in connection with certain offerings made under Section 506, where sales are limited to accredited investors. What’s a “general solicitation,” you ask? Well, it’s any time an issuer of a security seeks interest from the general public (as opposed to people or institutions with whom the issuer has a pre-existing relationship) for an offering through mass media (e.g., television, radio, Internet, etc.) or advertising. However, the JOBS Act does require issuers to take “reasonable steps to verify that purchasers of the securities are accredited investors,” pursuant to rule-making that the SEC will soon undertake. To be clear, general solicitation in connection with offerings done under Section 504 or 505 is still generally prohibited. We’ll discuss what all this means in greater detail below, but take our word for it, this is BIG news.

The portion of the law that has received the most attention thus far is the creation of an entirely new and novel exemption from registration under Section 302 of the Act in connection with “crowdfunding.” Although many people mistakenly believe crowdfunding is currently legal, sites like Kickstarter and Indiegogo are not investment platforms. Instead, they allow producers to raise money through donations, usually in exchange for a copy of the film, some branded merchandise, or other swag, but not for an interest in the production itself.

The key provisions of the CROWDFUND Act are:

Implications of the JOBS Act

As expected, there’s been heated rhetoric on each side of the debate. Critics claim that the law will expose investors to rampant fraud and abuse, while others protest that the legislation doesn’t do enough to help small businesses. Whatever your view of the bill, it is fair to conclude that the JOBS Act offers both benefits and challenges to producers. Below are some thoughts on the significant issues that will affect producers and funding portals in the near future as a result of the impending passage of the JOBS Act.

1. Ability to Engage in General Solicitation. Although it has received far less attention in the entertainment press than the crowdfunding legislation, the removal of the ban on general solicitation for Section 506 offerings represents a sea change in securities laws. Issuers of Section 506 offerings have historically been limited in their fundraising to investors with whom they had established a pre-existing relationship (i.e., personal, familial, or business relationship of a nature and duration sufficient to enable the investor to judge the character of the issuer). Producers may now significantly expand their universe of prospects. In this economic environment, having more options and flexibility is certainly an attractive proposition for producers. For example, although cold calls are typically unproductive, producers can now purchase lists of investors who have previously invested in films and target their fundraising efforts to this previously unavailable pool of investors. Similarly, from a securities law perspective — aside from privacy concerns or general business mores — there’s nothing stopping producers from literally taking out billboards advertising their project or soliciting people online. It is likely that a cottage industry will develop around this new marketing opportunity, resulting in increased usage of social media and a spike in advertising for investment opportunities.

2. Increased Access to Capital. It is undeniable that crowdfunding provides producers with access to a much larger universe of potential investors and facilitates a cost-effective aggregation of smaller investment amounts. Overall, this can be expected to increase individual participation in the market and reduce the need to approach and rely upon institutional financing sources. For some projects, this shift will mean that fundraising can focus less on demonstrating the outsized returns that institutional investors seek. But the real advantage will be for many projects that can seek funding from “affinity” sources. For example, films with environmental, medical, political or religious themes or projects based on niche or cult properties may locate funding easier from individuals motivated more by the theme of the project than the income statement.

3. Validation to Larger Investors. We expect that crowdfunding can be used as a form of validation or “proof of concept” for larger amounts to be raised institutionally. For example, the fact that $1,000,000 was raised from 500 investors at an average investment size of $2,000 facilitates development of a project and may significantly enhance a producer’s ability to seek an additional $4,000,000 from institutional sources.

4. Potential to Increase Project’s Valuation. Since the global financial crisis in 2008, institutional investors have increased market clout and negotiating power and can (and often do) “beat down” the price of a producer’s project and exact lopsided terms (both economic and creative) from filmmakers. The public market and the “democratization” of financing available through crowdfunding may ameliorate such imbalances and afford producers greater leverage to set the terms of these investments.

5. Liquidity. The CROWDFUND Act includes provisions permitting investors to sell their interests, with certain restrictions, without having to wait for an investment return that streams in slowly as part of a project’s ultimates. This provision may facilitate the evolution of a secondary market for film investments to provide investors greater liquidity while a film project is still in production or distribution. This could be a strong selling point to many investors.

6. P&A Raises. The statute permits producers to utilize crowdfunding to finance a film’s P&A budget. Producers with existing projects, perhaps those that have been shown at festivals but not picked up by a distributor, can use the crowdfunding marketplace to finance additional advertising for their projects, which can potentially lead to additional distribution alternatives. Also, keep in mind that issuers can conduct multiple offerings under the CROWDFUND Act (one for production expenses, one for P&A, one for finishing funds, or any combination) provided the raises are at least 12 months apart.

Things to Look Out For

1. More Investors May Mean More Headaches. Fortunate is the producer who has never had a conflict with one of his or her investors. To borrow a phrase from the Notorious B.I.G., “mo investors, mo problems.” Invariably, as producers sign up 10, 20, 50, or 500 investors for a particular project, it is a virtual certainty that one or more of them will object to something about the film (the script, the lead actress, the lack of a distributor, the distributor, that the sky is blue). All start-ups are risky businesses, and there may be nothing more risky than an investment in an independent film. Small, individual investors (with less money to invest) also tend to be more demanding in terms of reporting and access to information and less forgiving when a film flops.

2. Potential for Fraud. Much has already been written about the potential for increased fraud being perpetrated on the public through aggressive boiler room tactics. Although crowdfunding will help to democratize investments in the film space, it will also make it much easer to sell 10,000 percent of a movie. Are you listening, Max Bialystock? Funding portals, producers and other stakeholders must do all they can to reduce the incidents of fraud, as this issue is already on the radar of every financial regulator, and any scandal will certainly encourage additional regulations and potentially turn off an investing public already wary of “Hollywood accounting.” Indeed, one can only imagine the plaintiffs’ bar salivating over the new universe of lawsuits this legislation may create.

3. Potential Increase in Compliance Costs in the Near and Intermediate Term. Although crowdfunding has the long-term potential to reduce legal and other transaction expenses, it is unlikely to happen in the short term for a variety of reasons. First, because the law has not yet gone into effect and the SEC has not even issued its rulemaking with respect to crowdfunding, there are no templates or standards for securities lawyers and producers to follow. Although those standards are likely to evolve and funding portals will develop template documents, they are not yet available. Thus, attorneys advising their producer clients will still recommend fulsome disclosure documents, such as private placement memoranda that are typically used under the traditional Regulation D exemptions. In addition, assuming the production company is a single purpose entity structured as an LLC, the issuer will still need to provide investors with an operating agreement, investor questionnaire, and a subscription agreement. Assuming there are more investors making smaller individuals investments, this may actually increase transaction and reporting costs until these standards emerge. Think of all the K1s that will need to be generated and mailed out! Also, as noted, there are requirements to describe the issuer’s “financial condition,” which will impose additional accounting costs to generate financial statements and, in certain cases, audited financial statements. The CROWDFUND Act does not state what happens if an issuer has not yet filed a tax return and/or does not have an operating history sufficient enough to create audited financials, which will likely be the case for single purpose entities for one-off films. The SEC may address this issue in its rulemaking process.

What should producers, funding portals and investors expect in the short term from the passage of the JOBS Act? Once the president signs the bill, which he presumably will, the SEC is required to issue specific regulations governing crowdfunding and general solicitation. Keep in mind that the SEC is still issuing rules pursuant to Dodd-Frank, which was passed in 2010! As these rules are adopted, the specific requirements will be articulated and standards will emerge.

Although crowdfunding and the permissibility of general solicitation will not solve all of the funding challenges producers face, they will certainly transform many aspects of film finance, particularly for small, independent filmmakers.