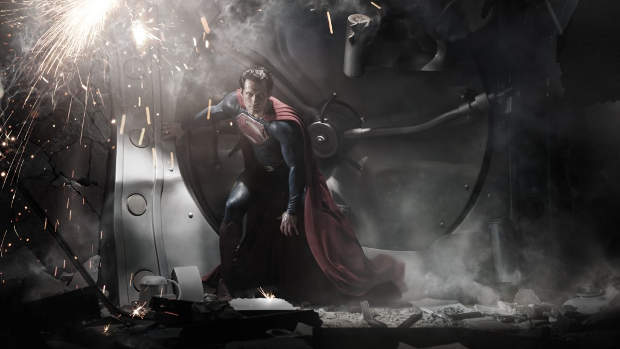 “A linear story had a linear workflow, but now we’re in a nonlinear immersive space,” explained production designer Alex McDowell at a recent Flux 5D event titled “Digital Design and World-building in the Narrative Media Landscape” held at the University of Southern California March 13, 14 and 15, 2012. McDowell is known for his groundbreaking work on Minority Report, but his more recent projects include Man of Steel and Order of the Seven, which he is currently designing at Disney; he is also the founder and director of Flux 5D, a consortium of designers, scientists, artists and educators interested in the collision of technology and cinematic storytelling. The terms “transmedia” and “world-building” constitute the key buzzwords at the center of this conversation, and they’re increasingly pertinent both in L.A. and at USC where I teach, and where there’s a lot of talk about the future of storytelling in a world characterized by networked and pervasive media.

The event kicked off the first night with a presentation by Tom Wujec, a fellow at Autodesk, a company that produces 2D and 3D design software (and was a main supporter of the event). Wujec sketched how unlimited computing power will produce momentous changes, not only for filmmakers but for all designers — he showed a 3D-printed red blood cell! — and invited the audience to focus specifically on three areas: digitized reality, or the ability of computers to sense the world and exchange real world data; high-fidelity simulation, meaning that you can not only build complex virtual worlds, but you can manipulate them as well, with incredible fidelity; and rapid fabrication, which allows us to create tangible outputs very quickly. He explained that these changes require a new understanding of the role of the designer, and by extension, the filmmaker. He also described the moment as “volatile, uncertain, chaotic and ambiguous,” noting that the rapid pace of change is causing great anxiety as much as it has the potential to ignite productive change.

McDowell followed with a presentation that illustrated some of the basic concepts of world-building, saying that the simplest definition is to understand a world as the container for narrative, or possibly many different narratives. He used as his example a new film titled Upside Down, directed by Juan Solanas and slated for release through Warner Bros.; the film takes place at the intersection of two worlds, with each hovering upside down in relation to the other. Naturally, a young man and woman fall in love across the divide. McDowell used the film as an example to demonstrate that world-building should not be construed as applicable only to high-budget productions such as Avatar, but can apply as well to more modest projects.He showed sketches and 3D models that helped visualize the story for all involved in the production, and it was abundantly clear that the story could only grow richer as it emerged from the world as it was designed in vivid detail. “When we build immersive, virtual story worlds, we are creating a dynamic new space for the narrative,” he explained.

Other highlights during the three-night event included a presentation by Patrick Hanenberger, a production designer at DreamWorks Animation, who focused on the idea of location and the development of a nonlinear design workflow on Rise of the Guardians that he dubbed a “viral design process.” While McDowell’s rendition of the nonlinear workflow resembles a mandala, Hanenberger proposed a bulbous and misshapen molecule, adding that 3D has become the common language, with the 3D art department, production design and visual effects all coming together in a synergy impossible in the past.

Jericca Cleland, a CG cinematographer who is currently directing an animated show for teens that is part of a larger transmedia project, noted that having a single path through production doesn’t work anymore. “It’s more appropriate to ask what the best path may be,” she said, noting that a nonlinear path can be incredibly powerful in supporting collaboration. Meanwhile, production designer Jim Bissell, whose credits include E.T. the Extra-Terrestrial and Mission: Impossible — Ghost Protocol, undermined the sense that world-building is a radically new concept by reminding the audience of the process used by photographer Henri Cartier-Bresson. “He didn’t take pictures,” explained Bissell. “He looked for places where a good picture was going to occur and waited.”

Over the event’s three evenings, world-building came to represent three distinct ideas: First, world-building can serve as a general term for the creation of stories. When you’re writing a script or imagining a film, you imagine a world, and many of the participants used this very basic notion as a starting point. But this position doesn’t do justice to the more radical potential of the term. World-building was also used to represent a new industry workflow that is nonlinear and builds from a world to the story. This notion of the term has significant implications for transforming the storytelling process, and some of the most productive information at the event explored these new models for working in detail. The third notion of world-building is the most interesting to me. It sees the term as a conceptual paradigm for both new workflows and new story structures and as a form somehow in sync with the momentous changes proposed by Wujec’s opening sketch of the world to come. “We need better metaphors and better ways of thinking about how to take advantage of this,” he said, and he’s right.