by Jason Guerrasio
in Filmmaking
on Nov 1, 2009 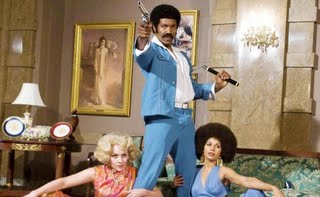 If you’ve read the latest issue (or run into me recently) you know that I dig the blaxploitation spoof, Black Dynamite. From its straight face acting to the way it was shot, director Scott Sanders (aka Suckapunch) and star Michael Jai White have created an impressive comedy that aesthetically holds up to most of the real blaxploitations of the 70s and puts a shot in the arm of the recently watered down spoof genre.

But one of Dynamite‘s greatest aspects is its music. The film’s editor, Adrian Younge, created the original score through the use of instruments and analog recording equipment from the era the film is based in. He explains how he did this in a sidebar to our Black Dynamite feature in the Fall issue. But below is a promo of the soundtrack’s release through the indie magazine/record label Wax Poetics which touches on how Younge created the sound. You can buy the score and soundtrack on their site. Black Dynamite is currently playing in theaters.