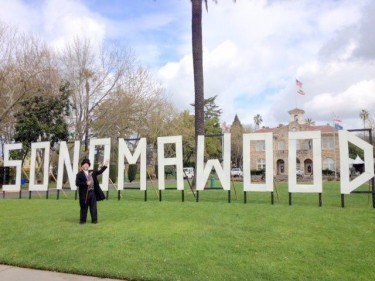 Once-in-a-lifetime experiences abounded at this year’s Sonoma International Film Festival, a boutique event in the heart of northern California’s wine country – complete with complementary wine and cheese before every screening (and a trailer featuring an animated, tap-dancing wine bottle named Tipsy whose tagline read, “Is everything out of focus, or is it just me?”). Held early April, a week apart and an hour’s drive – yet a world away – from that longest running festival in the U.S., SIFF serves as a worthy reminder that attending non-market-driven fests not only allows one the opportunity to discover overlooked diamonds amongst the seemingly rough cuts, but to enjoy chance encounters that have been programmed out of the older and slicker fests. While the films themselves might not have the cachet associated with the big boy on the Bay (save perhaps for the opening and closing night bookended Luc Besson flicks, The Lady and Radu Mihaileanu’s The Source) SIFF’s random weirdness factor proved absolutely intoxicating (no pun intended, really) to this non-drinking cinephile.

First there were the venues, within easy walking distance of the historic downtown Plaza, my favorite being the Sebastiani Winery Barrel Room where a screen and seats were arranged adjacent to the cavernous wine tasting area, the entire Tuscan setup surrounded by lush vineyards. Then there were the events, such as La Quinceañera Film Fiesta (in honor of SIFF’s 15th birthday), a program of Latino-themed shorts and features that also had its own actual fiesta in The Backlot tent next to City Hall. That’s where I stood in line behind the Award of Excellence recipient Christopher Lloyd – star of Jonah Ansell’s inventive animated short Cadaver, as well as Greg Garthe’s overeager-to-please feature Last Call. Though even seeing the guy who played a psych patient in One Flew Over The Cuckoo’s Nest, “Reverend” Jim on Taxi and “Doc” Brown in the Back to the Future series snacking on chile rellenos seemed rather run-of-the-mill compared to the Scottish-themed, Friday night dinner I lucked into. (Or rather SIFF’s dynamic and unbelievably on-the-ball publicist got me into.) That kilt-and-haggis-filled shindig was in honor of the first feature-length Scottish animated film, Sasha Hartmann’s Sir Billi, showcasing the voices of Sir Sean Connery and Alan Cumming, and with a theme song sung by Dame Shirley Bassey. Though the onetime Bond man declined to attend the fest, Dame Bassey graced us with her fur-clad, blinged-out presence, and ended up holding court three seats down from me at the VIP dinner. (And by the way, did I mention that the familiar-looking older gent serving us wine straight from his own vineyard used to play Ronald McDonald?)

All of which made the presence of John Waters, staging his one-man show This Filthy World on Saturday night, suddenly seem like karmic common sense. (I decided to skip the UFO Sidebar – with its focus on “Disclosure” – at Vintage House as I didn’t want to hit my mondo trasho quota too early in the day.) Though Waters has been touring this stream-of-consciousness style monologue for quite some time (topics range from his admiration for Kroger Babb and the sploshers fetish –- because “you can’t date rape a cookie” — to his hope that working for Vogue would allow him press access to crime scenes, where he would butt through police lines and demand, “O.K. – what were they wearing?”) it’s hard to ever truly tire of The Pope of Trash. Especially since Waters is such a wholesome family man (albeit his non-blood relatives include a former kidnapping victim of the Symbionese Liberation Army) and engaged cinephile at heart, pitching his idea of an abortion film festival that would include a Rocky Horror Picture Show type event for 4 Months, 3 Weeks and 2 Days. 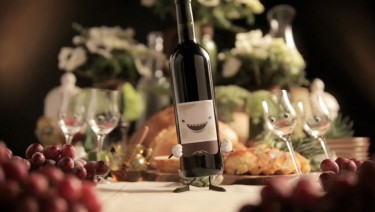 And while I didn’t catch any flicks that rocked my world like that Romanian film did years ago, I was fortunate enough to make at least one true discovery in both the shorts and feature categories. As for the latter, Lawrence Blume’s Tiger Eyes – based on the classic teen novel by his mom Judy Blume – is the rarest of family films, smart and nuanced, with an attention to detail in images that mirrors what is Ms. Blume’s strength with words. It’s a passion project for mother and son – and it shows. The often-heartbreaking dialogue (much of it taken directly from the book) and characters infused with depth (thus avoiding even a whiff of cliché) are an actors’ dream; while the workhorse ensemble is such to director Blume, who in turn is extremely respectful of his source material. There are also shockingly mature performances from the cast’s younger members (Blume shrewdly employed the same casting agent responsible for casting Winter’s Bone), including Willa Holland as Davey, the teenager hurled into growing up after her father is murdered and mom relocates her and her younger brother from Atlantic City to Los Alamos, New Mexico. Then there’s Tatanka Means – the real-life son of Native actor/activist Russell Means, who plays his dad in the film. Considering that the younger Means is an acting newbie, his easygoing turn as Davey’s (spiritual) love interest, Wolf, is nothing short of astounding. It’s only a matter of time before the studios snatch up this charismatic swooner.

Though not every scene of Tiger Eyes reads as realistic (I’m thinking of Davey’s recital in which Wolf suddenly appears in the doorway backlit like an angel), this point is moot since every image is palpably truthful to an adolescent’s (often melodramatic) POV. Which means that the Blumes dig deeper than merely presenting reality. Such is also the case with my short film find, Canadian director Jill Sharpe’s Bone Wind Fire, a painterly meditation on the lives of three female artists, Georgia O’Keeffe, Emily Carr and Frida Kahlo, and a cinematic art piece unto itself. Structured through words taken from the women’s letters and journals, the nonfiction flick (which rightfully won Best Documentary Short) utilizes fiction techniques in a mesmerizing way, such as “body doubles” shot in earthy New Mexico, lush Vancouver and colorful Mexico, but only seen from behind, reflections from a mirror or lake revealing the faces of the actual artists. Metaphor is made visual in gallery scenes in which art snobs are shown squinting and tsk-tsking as if from a two-way mirror, able only to conjure up their own images and preconceived notions rather than to see what is truly in the frame.

While I missed the one Canadian flick that seemed to stand out overall – Ken Scott’s TIFF 2011 hit Starbuck nabbed both Audience Favorite World Feature and Best Narrative Feature – I was able to catch Kivalina V. Exxon, the latest from Montreal native Ben Addelman, one of the directors behind Nollywood Babylon, which I gave a high thumbs-up to during its theatrical run. This time Addelman has trained his lens on the Alaskan village of Kivalina, which has brought a lawsuit against big oil, hoping the corporations responsible for the climate change that is wiping out their land will at least pay to relocate the 400 members of their indigenous tribe. The doc is less surprising – a tiny whaling community slaying the Goliath moneymakers only happens in Hollywood after all – than Addelman’s previous study of the world’s third largest film industry in Lagos, Nigeria. (Though this doc does include a head-scratching sound bite from the Governator – “By putting all of our eggs in one basket, we fail to see the other eggs in the other baskets” – at the Copenhagen Climate Change Conference.) Kivalina V. Exxon nevertheless is noteworthy for its attention paid to the everyday lives of the victims of willful (government and corporate) neglect above any court proceedings. There’s even a bit of poetic justice in the fact that the plaintiffs are represented by a former Philip Morris defense lawyer, engaged in his own form of penance by repurposing the successful case established against his former employers to hit Exxon and its ilk. But ultimately, Kivalina will always be the “canary in the coalmine,” as one resident puts it, a town no one wants to acknowledge because it’s also a global portent.

A surprising doc of a lighter sort, Dave Wruck and Robin Bond’s Derby Baby: A Story of Love, Addiction and Rink Rash, puts a different “spin” on the well-worn topic of women’s roller derby, female empowerment’s answer to staged wrestling. Though the four-wheel-driven ladies, with names like Bonnie Thunders and Vicious Van Gogh, would generally take issue with that comparison since it brings to mind the sexy fishnets and abundant tattoos rather than any athleticism. Never mind that professional wrestlers are often in better shape than pro baseball players, not to mention roller derby is and has always been run mostly by men – when a spectacle is out to legitimize itself as a sport there’s bound to be some image cleansing. Which is where Derby Baby really sets itself apart from the pack. Predictable scenes of (overwhelmingly white hipster) chicks kicking ass in the rink, and interviews with usual suspect talking heads become more interesting – and Juliette Lewis’s narration thankfully less grating – once you realize the doc is actually a portrait of a nascent sport’s journey from grassroots DIY inception to mainstream corporatization. Where is the line between growing up and selling out? It’s the million-dollar question even Title IX couldn’t solve, a dividing point between rebellious girls and the strong thinking women they eventually become. Then again growing pains are quite healthy. Or as the director of Crybaby advises during his one-man show, “Be glad your kids are in trouble – they’ll go into the arts.”