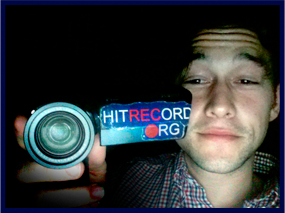 The Sundance Institute announced today the 13 artists selected for the New Frontier section at the 2010 Sundance Film Festival. These works will be shown at New Frontier on Main, open to the public Thursday, January 21 through Saturday, January 30, 2010. (The full list of artists are below.)

One of the artists chosen this year is actor Joseph Gordon-Levitt (pictured), who we discovered last year has an interest in the new media/digital artists on the Web as he’s created the site hitRECord.org. In the Spring 2009 issue we talked to him about the site, which at the time was still not fully realized he admitted, but his goal is to have the site be a home where filmmakers, artists, poets, musicians, ect. can start or contribute to works (or what he calls “remix” works) in a supportive community with the final project owned by the community. “This is my whole take on the Internet creative culture,” Gordon-Levitt says in the piece. “Why would you take time out to be negative? Instead of posting something that’s negative I’d rather move on and look for something good. Everyone [who comes to the site] understands this and has built a positive community.” He continues: “What is good about hitRECord is that you don’t have to confront that blank page. I see what’s getting a lot of hearts (the way works are rated on the site), I add something to it and reupload it. The idea is if lots of people do that we’ll get a collective refining of our records. It’s not about an individual author; it’s the desires of what I hope will be hundreds of refinements.”

According to the release, Gordon-Levitt plans on “creating a cohesive short multimedia work that will have a special screening at the end of the Festival.”

Gina Czarnecki
“Nascent,” “Cell Mass N2,” “Infected”
Multimedia artist, Gina Czarnecki, explores the convergence of biology, sensuality, dance, and the cinematic in her mesmerizing single channel installations. Developed in collaboration with biotechnologists, computer programmers, dancers, and sound artists, Czarnecki crafts gorgeous, digital meditations on the human form in motion, gazing across scale, blurring the boundaries between the mass and the cellular, and investigating what is possible when nature ends and the technologically manipulated begins. Czarnecki’s works have been exhibited throughout the world. Czarnecki currently lives and works in Liverpool, UK. For additional information on this artist go here: http://www.ginaczarnecki.com/

Petko Dourmana
“Post Global Warming Survival Kit”
Petko Dourmana’s fascinating interactive multimedia installation invites audiences to explore a post apocalyptic landscape and visit the workplace of a person whose job it is to observe the border between land and the rising sea. Upon entering the room, viewers at first think there is nothing in it but an old caravan. However, once they alter their ability to see through the darkness with night vision devices, viewers can experience and explore the hauntingly futuristic landscape surrounding them. For additional information on this piece go here: http://www.dourmana.com/node/5

Petko Dourmana is a media artist based in Sofia, Bulgaria. As a founder and chairman of InterSpace Association since 1998 Dourmana has been involved in production and co-production of art events and projects with Bulgarian and international artists and activists. Additional Information on the artist can be found here: http://www.dourmana.com/

Thomas Glaeser and Jens Franke
“The Earthwalk”
Attention Google Earth Junkies! Digital media designers Thomas Glaeser and Jens Franke invite you to surf the globe with your feet! Their installation, THE EARTHWALK, offers an intuitive way of controlling Google Earth by letting the user navigate the earth’s surface by stepping onto a map projected on the floor. Fly around the world in one minute or descend upon they city of your choice and become immersed in your favorite tangle of streets. THE EARTHWALK lets you soar and explore the planet, one step at a time. To see a video of the piece go here: http://bit.ly/3p31Zd

Jens Franke is a German based user interface designer currently working at Intuity Media Lab GmbH. Thomas Glaeser specializes in research and conception in the field of interface and interaction design. He is currently a managing partner of Envis Precisely.

Joseph Gordon-Levitt
“hitRECord.org”
Part media workshop, part social network, and part art exhibition, hitRECord.org is a hybrid production enterprise that taps crowd sourced creativity and topples traditional ideas of artistic ownership, online communication, and art production. Actor Joseph Gordon-Levitt’s (“500 Days of Summer,” “Mysterious Skin,” “Brick”) invites audiences to collectively collaborate with him in the filmmaking process, and create, record, and remix each other’s art (video, music, photos, writing, etc.) with the goal of creating cohesive short multimedia work that will have a special screening at the end of the Festival. To learn more about hitRECord go to: http://hitrecord.org/

Eric Gradman
“Cloud Mirror”
Artist and computer scientist, Eric Gradman brings online social networking back into the human realm with, Cloud Mirror, an interactive augmented reality art installation that merges audiences with their online identities. Step in front of the magic mirror and you will see yourself in the flesh. You will also see your “second skin” – a thought bubble with information from your Facebook, Twitter, and other social network identities. Anyone who has properly registered can participate in this playful and insightful work which aims to bring online intimacy back into human interaction. To see a video of the piece go here: http://www.exothermia.net/monkeys_and_robots/

Gradman recently graduated from the University of Southern California with his Masters in Computer Science. He currently lives and works in the greater Los Angeles area.

Michael Joaquin Grey
“Various Titles”
Computational artist Michael Joaquin Grey creates “objects” out of film. Orbiting planets pulse with the beat of Miles Davis; the classic film, The Wizard of Oz, throbs and spins around its own axis; the impossible life/death cycle of cartoon characters take the shape of morphing slime molds; and a cinematic Escher’s knot articulates the continuum between teen sex and pregnancy. Beautiful, elegant, and fascinating to watch, Grey’s artwork exists at the boundaries of art, science, and media and contemplates the origins of life, language, and physical form.

For the past twenty years, Michael Joaquin Grey has been creating work that extends and plays with the boundaries of art, science, and media. Most recently he has been exploring computational cinema and choreography with sound, motion and video. Additional information on this artist can be found here: www.citroid.com/. Images of Grey’s work can be found here: http://www.bitforms.com/michael-joaquin-grey-gallery.html.

Ragnar Kjartansson
“The End”
A soulful siren song lures the viewer to attend a magical surround sound concert performed from five different locations in the Canadian Rockies. Icelandic musician and performance artist, Ragnar Kjartansson’s mesmerizing 5-channel installation is a portal to another time and place, transporting the viewer to a sweeping expanse of alpine landscape where just two musicians, Ragnar & Davio Por Jonsson fill the crisp snowy air with an entire ensemble band of electric and acoustic guitars, banjos, drums, and a grand piano. To see a video of the installation go here: http://bit.ly/3gQD4h.

Ragnar Kjartansson graduated from the Icelandic Academy of arts in 2001. His work spans durational performance, theatre, painting, video, and music. Kjartansson has been in numerous solo and group exhibitions throughout the world. For additional information on the artist go here: http://this.is/rassi/

Matthew Moore
“Lifecycles”
As a fourth-generation Arizona farmer whose land is currently being encroached upon by suburban sprawl, Matthew Moore designs his installations to reconnect consumers to their local geographies and the life cycles of the Earth and its produce. Lifecycles is a multimedia installation that reconfigures the produce section of a Park City grocery store and transforms the experience of shopping for vegetables into a beautiful meditation that brings us closer to the lifecycles of the produce we buy and consume.

Moore grew up working on his family’s farm in Waddell, Arizona. Moore’s artwork grew out of his background in farming. Moore says, “As a farmer and an artist, I display the realities of the trials and tribulations of American agriculture, its roles in contemporary globalization, and its questionable ecological practices create a foundation for my explorations.” To see more of Moore’s artwork go to: www.urbanplough.com

Pipilotti Rist
“Lobe of Lung: The Saliva Ooze Away To The Underground”
The deviously delicious imagination of internationally renowned multimedia artist Pipilotti Rist invites audiences to lie back and lounge inside her film. Lobe of the Lung is a fully immersive installation rendition of her debut feature film Pepperminta, which is being screened in New Frontier’s film program. Starring two humans, a pig, and an earthworm, Lobe of the Lung merges fantasy with reality as it opens up the walls of New Frontier onto a luscious panoramic poem that bathes audiences in audiovisual delight.

Pipilotti Rist was born in 1962 in Grabs, Switzerland. Rist’s works have been exhibited widely at museums and festivals throughout the world. Rist currently lives and works in Zurich, Switzerland. Additional Information on the artist, and links to her gallery and feature film can be found here: http://www.pipilottirist.net/

Tracey Snelling
“Bordertown”
Snelling’s exquisitely crafted miniature sculptures of buildings and landscapes conjure a visceral sense of time and place and emanate a life that comes from within. Incorporating architecture, photography, collage, film, and audio, Snelling presents a carnivalesque tableau of the Mexican/American border that tells the story of a sweeping locale and of the individual inhabitants residing inside the buildings, streets, and alleyways. The cinematic image stands in for real life and it unspools behind windowpanes, conjuring a sublime sense of both wonder and nostalgia. Snelling currently lives and works in Oakland, CA. Additional Information on the artist can be found here: http://traceysnelling.com/portfolio.html

Nao Bustamante
“Silver and Gold”
Filmmaker and performance artist Nao Bustamante returns to Sundance with a deliciously outrageous and ambitious new work; her short film Untitled #1 (from the series Earth People 2507), starring her toy poodle as a herd of buffalo, appeared at the 2008 Sundance Film Festival. Silver & Gold combines film, live performance, and original costumes into a self-proclaimed “filmformance” that evokes the muse of legendary filmmaker Jack Smith and his tribute to 1940s’ Dominican movie starlet Maria Montez in a magical and joyfully twisted exploration of race, glamour, sexuality, and the silver screen.

Nao Bustamante’s work encompasses performance art, sculpture, installation, and video. Her work has been shown throughout the world. Bustamante lives and works in New York. She is Assistant Professor of New Media and Live Art at Rensselaer Polytechnic Institute. For additional information on the artist go to: www.naobustamante.com

Kalup Linzy
“Sweet, Sampled, and Left Ova”
Kalup Linzy’s work is a splendid mix of southern culture, daytime soap opera, and the raunchy, shady humor of black gay culture, all turbocharged with fierce DIY Network determination. Linzy writes, directs, and stars in his hilariously melodramatic tales of love and flama. Following the video presentation, one of the characters, Taiwan, comes to life to star in a multimedia musical performance. Featuring the videos, Ride to da Club, Conversations wit de Churen VII: Lil Myron’s Trade, and episodes from the series Melody Set Me Free.

Kalup Linzy is a video and performance artist currently living and working in Brooklyn, NY who has performed the world over. To see Linzy’s Youtube station, Da Churen and Company, visit: http://www.youtube.com/user/kklinzy