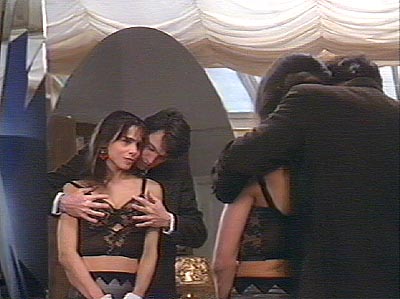 One of the pleasures of Annette Insdorf’s new book on the director Philip Kaufman — titled, simply, Philip Kaufman (University of Illinois Press, $22.00) — is how jargon-free it is: while it implicitly subscribes to the auteur theory, which credits the film director as the creative author of a film, it does so through the type of patient close readings that have fallen out of fashion.

The first book-length assessment of Kaufman’s oeuvre, which will reach 14 films when Hemingway and Gellhorn premieres on HBO in May, Philip Kaufman is a shrewd and very readable study. It seeks not only to locate Kaufman’s distinct visual style and philosophical bent across his body of work, but also to elevate Kaufman to a unique niche in American and world cinema: as a Euro-style auteur living in the U.S in the age of commercial cinema, whose work across genres resists easy categorization but nonetheless resonates for its freshness of perception about the human condition and the codes of behavior that both restrict and liberate us.

Insdorf, a long-time professor of film at Columbia University who has been a key curator of filmmakers such as Truffaut and Kieslowski (about whom she has written eloquent books), approaches Kaufman’s films stylistically and thematically rather than chronologically or biographically, which is a smart choice considering that several cluster so well together.

Insdorf pinpoints a Kaufman-esque voyeurism, one which, as she writes of The Unbearable Lightness of Being, “applies as much to the viewers as the characters.”

Insdorf underscores how in translating Milan Kundera’s novel, and in reshaping source material for the other two films in this “trilogy,” Kaufman sports with the theme of “sanctioned” and “forbidden” sight.

“There is a tension between the privileges and limitations that Kaufman bestows upon us as spectators,” she writes of The Unbearable Lightness of Being. “Isn’t he playing an elaborate game of seduction with the viewer by not showing us what transpired between Tereza and Sabina? He lets us glimpse an intimate moment and then abruptly cuts, leaving us wanting more.”

Insdorf calls Henry and June, the first film to receive the NC-17 rating in the United States, a companion piece to The Unbearable Lightness because it also explores voyeurism and desire: specifically, she analyzes how the film documents Anaïs Nin’s rite of passage from innocence to experience, a passage in which seeing the forbidden helps Nin become a better writer.

Similarly, Insdorf finds Kaufman exploring voyeurism in Quills: “Beginning with the Marquis behind a window,” she writes, “he is both a spectator to the excesses of the French Revolution and (for us) a spectacle.” In press notes for the film, quoted by Insdorf, Kaufman reveals questions that energized his Quills: “How to make this movie,” writes Kaufman. “How to transform the theatrical setting to film, how to move the camera so that it constantly might reveal something new as voyeurs and gossips spy upon one another through cracks, crevices, slots and peepholes?” 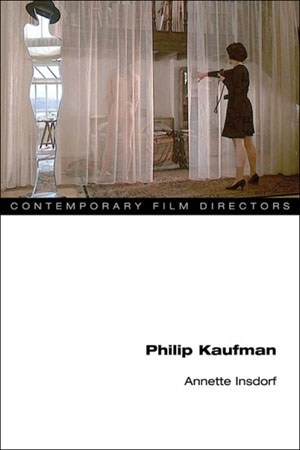 When Insdorf shifts to a set of films about male relationships and codes of honor, including the little-known The Great Northfield Minnesota Raid (1972), The White Dawn (1974) and The Wanderers (1979), as well as the popular, The Right Stuff (1983), I found my attention wandering, not because Insdorf’s analysis was any less rich than in the book’s front section, but simply because I didn’t know these films as well and wasn’t as invested in their themes.

To her credit, Insdorf invites the reader to care more about the continuity across Kaufman’s — and any director’s — work; her book also includes sections on the filmmakers’ Invasion of the Body Snatchers, Rising Run, and Twisted.

Insdorf ends Philip Kaufman with a compelling interview with the director, in part excerpted from her own onstage Q & A with Kaufman at the 92nd Street Y in New York in 1993. Kaufman openly discusses what he considers the reciprocal filmmaking process: “When I come to the set in the morning,” he tells Insdorf, “I feel the director’s job is not just to stimulate the actors or boss them around but to be stimulated by them, so that by the end of the day, I feel I’ve been greatly amused and interested…. This is our life, and this is what we do, and we’re lucky to be doing it. I’ve been fortunate somehow, despite many commercial failures, to keep going.”

And yet, as the journalist Anne Thompson notes in her Thompson on Hollywood blog on IndieWire, there’s something “tantalizingly” missing in Insdorf’s book — something about the quality of an American filmmaker with a European sensibility, who keeps fighting against the grain, fighting through the obvious pain of having to satisfy the U.S film industry’s harsh commercial imperatives; who keeps wanting to create films that search for and discover a fresh insight about the human condition, rather than achieve a particular box-office number.

“We try, with varying degrees of success,” Kaufman tells Insdorf, “to create and explore a world of beauty, mystery, sensuality – a world with its own rules, its own unique inhabitants. Characters, players, artists, clowns, jokers, and sometimes monsters – a world of fun. Fun while it lasted. Eventually each of these films had to bite the apple, to get released into the howling world where they journeyed through pain and suffering, often misunderstood, sometimes maligned.”

And then he says one of the most honest and touching things I’ve read by a filmmaker in a long while: “Yet when I look back on these films, they are now all suffused with a warm, golden glow of memory, green thoughts in a green shade. It makes me wonder if just outside the Garden of Eden someone had posted a sign: Beware all who enter here. You will be judged as to how you did at the box office.”

Insdorf’s book goes a long way toward rescuing Kaufman from such a fate.

2. The National Arts Club on April 25 at 7:30, before a screening of Quills (this is a private event for NAC members)

3. The Museum of the Moving Image on April 28 at 5 (before a screening of Invasion of the Body Snatchers)

4. The Jacob Burns Center in Pleasantville, NY on the evening of June 21 (after a screening of The Right Stuff).

Charles Lyons is the author of the book The New Censors: Movies and the Culture Wars. He was a staff film reporter for Variety and contributes to TOH, IndieWire, The New York Times and elsewhere.