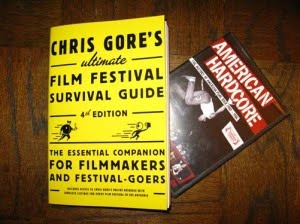 Paul Rachman, whose feature documentary American Hardcore, premiered at Sundance in 2006 and then was sold to Sony Classics, penned a 17-page chapter of Chris Gore’s Ultimate Film Festival Survival Guide.

Here are some of the tips listed in the chapter:

– Your festival preparation starts the day you find out you have been accepted. If you are not working nonstop from that moment until your World Premiere, then you are most likely leaving important things undone.

– The most important thing about your major festival world premiere is to keep it that way—a premiere. Do not start sending the entire film to potential distributors, exhibitors or press; they will ask you for this, but it will most always work to your disadvantage. Let them see the film with an audience.

– Early press (other than a review) is important if you can get it. Find a story about your film. Where was it made? What’s special about it? Is there a connection to a community or event? Try to get this story placed. Even your local hometown newspaper can have an effect. Stories about films going to Sundance can get picked up by the wire services (AP, AFP, Reuters) and go global. Once the press is aware of your film, media attention can be much easier to get at the festival. If you choose to go with a publicist, it can be a huge boost to the film. But if you choose not to hire a publicist (we did not), it’s important to have a dedicated member of your team acting as the “publicist” who can drum up media attention for the film before and during the festival, and be the main contact person for the press. It’s helpful if you can get that person accredited as a publicist at the festival.

– Use all the power of the web and social networks. If you haven’t already, create your film’s facebook page, twitter account, and blog now. Buzz is important at the festival, and the best Buzz comes from your fans and audience. Motivate your audience and fans to publicize for you. Reach out to everyone.

– If you are lucky enough to get a distribution offer for your film, make sure you have a great lawyer who can get the deal points right. Most deals get negotiated over the next couple of months after the festival. It doesn’t have to be officially announced at the festival.

– If you are not getting offers, consider a DIY plan for your film. Deals may not come forward after the festival, but your film will be at a peak of press and publicity so use that to jump start a potentially viable self-distribution plan that could build on the popularity of the film.

There is a lot more information in the AMERICAN HARDCORE chapter of the book, as well as other filmmakers’ experiences at many festivals.

Good luck to all the filmmakers going to Park City this year, have fun, enjoy the spotlight and try make time to see as many other films at the festival as possible, it’ll help you relax.

Learn more about Rachman at his blog, linked above, and click on the book title to purchase it at Amazon.