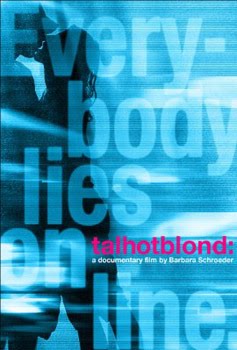 Several days after Paramount surprised the indie world with the announcement of a new division aimed at producing $100,000 micro-budget films, the studio’s Paramount Digital Entertainment (PDE) arm announced the pick-up of Barbara Schroeder’s indie doc, tallhotblond, Best Doc winner at the Seattle Film Festival. The film was repped by New York-based Submarine Entertainment and, reports Jeremy Kay in Screen Daily, the deal “is the first of its kind for the division.” He continues, PDE “will make the film available through download-to-own digital distributors including iTunes and Amazon following the broadcast premiere on MSNBC on December 13.”

“talhotblond is both incredibly compelling and timely,” Keith Quinn, PDE’s senior vice-president of creative development and production, said. “Given that it tackles the hot 21st century issue of online identity and cyber crime, it’s a good fit to make it available to audiences worldwide, especially those who are plugged in to digital distribution.”

“A cautionary tale about the dangers of online identity, twisted true-crimer talhotblond focuses on an Internet love triangle in which one man killed his perceived rival, despite the fact that neither ever met their eponymous correspondent. Low-budget debut feature from L.A.-based multihypenate Barbara Schroeder builds suspense with an ingenious narrative device and solid cutting between multitudes of salacious instant messages and exclusive interviews.”

In the Los Angeles Times piece on Paramount’s new micro-budget division, John Horn wrote, “Not all of the micro-budgeted movies Paramount intends to make will be released theatrically.” With Paramount Digital Entertainment making new media and TV deals for small-scale indie features, it’s obvious that the studio foresees multiple distribution possibilities for these films.