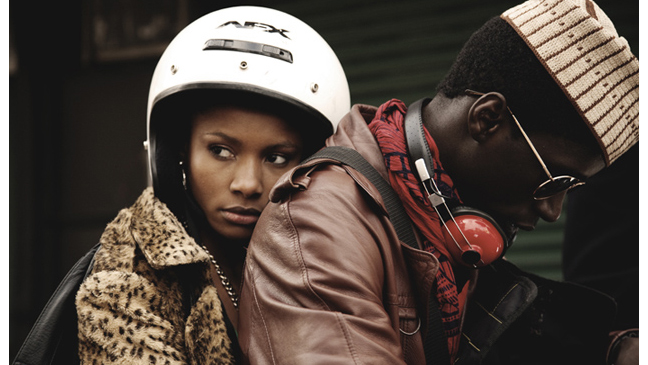 Andrew Dosunmu’s debut fiction feature, Restless City (currently in release from AFFRM in New York, L.A. and Atlanta), is perhaps the most ravishing film you’ll see on a movie screen right now. An immigrant crime drama set along Canal Street about a Senagalese motorcycle messenger, a local crime boss, and the beautiful woman that comes between them, the film combines the sensitive eye of Dosunmu, a fashion photographer and music video director, with the masterful cinematography of Bradford Young. The result is a film that reimagines our urban landscape in bold, fresh ways.

I interviewed Dosunmu for the current issue of Filmmaker, and the full interview is print only. But here’s an excerpt on Dosunmu and Young’s collaboration. And go see the film! You can find showtimes here at its website.

FILMMAKER: Tell me about working with your cinematographer, Bradford Young. As a photographer with a very specific eye, what was it like collaborating with someone else?

DOSUNMU: Oh, it was amazing. I remember when I met him, he knew all my photographic work, and that helped so much. He know some of my work that I can’t even remember! He showed me these reference books, and they were a lot of my pictures. So we sync’ed immediately. I was very, very fortunate to have collaborated with a DP who knew and related to my references. If I said to Bradford, “Think of Djibril Mambéty,” you know, the Senegalese filmmaker, or, “Think of Souleyman Cissé,” the Malian filmmaker, he knew it. For Restless City, I said our reference for skin tone was the mask, the African mask, the darkness of that mask that everyone in Africa has at home. Or the streets of Mali, the dust that I saw on the streets of most African metropolises: I wanted the whole frame to feel dusty — dirty and moody. He related to that because he knew the terrain. So, we collaborated seamlessly.

FILMMAKER: Could you talk a little bit about the compositions, and also the lens work in the film, because you go back and forth from shots with extremely deep focus to very shallow focus.

DOSUNMU: I really wanted to convey what one experiences when you’re in the hustle of New York. You know, there’s always this sort of foreground element. You walk down Broadway or Canal Street and you think you saw your friend, but it might not be him because there’s a car, there are the buses, there are all the vendors everywhere. I really wanted to play with depth of field, the foreground/background element, with the distances changing constantly, you know? There’s hardly that much close-up in Restless because I felt like you don’t see people that close in New York. There’s always so much other stuff that distracts you from them. You’re talking to someone on Broadway and there’s a siren going by. It’s always this collage. So, Restless was really about long lens, portrait lenses, more depth of field, foreground, background elements, and always something in the frame to keep it dirty. Dirt was the word, really. We wanted to keep the frames dirty every time, make them like [photographic] plates. I’m very influenced by William Klein’s photography. A lot of times I thought, how can I create a William Klein picture?