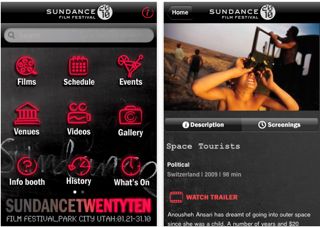 I don’t have an iPhone.

There, I’ve said it. I’m still holding onto my Blackberry. (Note to Apple: please let me upgrade to an iPod Touch by putting a camera in it and, while you’re at it, switch to Verizon.) So when Sundance kindly sent me their new Sundance Film Festival iPhone app, I sent it to the most knowledgeable person about apps I know, producer Noah Harlan, whose 2.1. Films has a division, Two Bulls, that makes apps which have included everything from a film footage calculator to an app for Victoria’s Secret.

The Sundance Film Festival iPhone app is featured at Apple’s iTunes website and App Store. Much more than a digital version of the printed Festival guide, the app is connected and delivers real-time information to fan’s pockets wherever they may be. Users are able to search films and events, watch videos and trailers, interact with Twitter and Facebook, upload photos, find venues using location-based services and maps and much more. Sundance Institute will update the schedule, add content and add new events in real-time. Fans will access the Sundance Film Festival film guide and schedule, read about special panels and events, access top stories, meet the participating artists, search films, and watch videos. It is available online now for $4.99.

And here is Noah’s quick review, which he sent back to me in the form of an email:

I took at look at the Sundance app and there are some really nice things about it. It’s got a great amount of information about films, sections and schedules on it. The actual navigation is a little wonky at times, though, and the design, while it has some things to admire, also has some things that are a little form-over-function. (When we build apps we adhere to the principle of doing the minimum, polishing the experience, and then adding features.) It seems like in version 1.0 of the Sundance app they have tried to do SO much (providing posters, trailers, videos, party pictures, a city guide, etc…) that the interface becomes inconsistent. Some things are lists, some things are cover flow, some things are carousels — there are a lot of different ways to navigate the content. The app also crashed on me a few times but hopefully they’ll work these minor glitches out.

I think the biggest thing missing is that there doesn’t appear to be a way to build your own schedule or lists of favorites. With so much content in the app and an event with so many films, making it digestable and useable is the challenge. One of the hardest things to do at a festival is come up with effective ways of managing all of the things you’re trying to accomplish.

The app does seem to have a nice balance of useful content for festival attendees and media for those not able to be there (videos, party pictures, etc…). I suspect this will be a good app to have whether you’re in Park City or not, and hopefully they’ll continue to work on it and improve its functionality as it moves along. Overall I give this a thumbs up and applaud Sundance for being really ambitious with their goals.

UPDATED: Someone in the comments section raised the question of the cost of the Sundance app and I wanted to add a couple thoughts about that. First off, in the interest of full disclosure, I was offered a free version of the app to review. The app costs $4.99 from iTunes, 70% of which goes to Sundance as the publisher of the app. Sundance states in their app description that “Purchasing of this iPhone app supports Sundance Institute’s year-round non-profit work of developing and discovering new artists and audiences”.

Generally I am opposed to charging for apps of this type as really this app seems largely promotional in nature. In this case, I give Sundance a pass as they are hoping to raise much-needed revenue to support the institute’s programs. I know from our experience developing apps that by charging Sundance is giving up a huge volume of downloads and the promotional exposure those downloads would afford. If you want to support Sundance, the price is worth it, if you just want dispatches from the festival, there are a multitude of free blogs which will have volumes of content.

One note: with regard to one of Noah’s points, Sundance has partnered with B-Side to create an “enhanced online film guide” based on its Festival Genius technology that will let users manage their experience and order tickets.