by Nicholas Rombes
in Columns, Filmmaking
on May 7, 2012

I wondered when, or if, this would happen: a Blue Velvet frame that depicts nothing. This comes from the time-space between the beating that leaves Jeffrey unconscious and waking up the next morning in the dirt. For around six seconds between these scenes, the screen is filled with a close-up of a candle flame holding its own against a roar of wind, only to be extinguished, followed by a black screen, from which this frame is taken. Jeffrey’s mind going black. Blank.

The black screen, haunted with psychopaths and monsters. Of all of Blue Velvet’s uncharted associations, perhaps the most obscure is its relation to the dark, uncanny antebellum writings of Nathaniel Hawthorne, Edgar Allan Poe, George Lippard, Robert Montgomery Bird, and Emily Dickinson. In fact, three mysterious letters that Dickinson wrote—but apparently never mailed—to someone she referred to only as “Master” reverberate weirdly (and I’m sure unintentionally) in Blue Velvet. Between 1858 and 1861 Dickinson drafted these letters, which actually could be poems in letter form, since Dickinson blurred the lines between these two modes. Speculation as to who these letters were intended for range from the Reverend Charles Wadsworth to the editor Samuel Bowles. Some have even speculated that the “Master” is none other than God, or Satan. The letters share the same dark current as Blue Velvet: domination, submission, obedience, authority, mystery, and—yes—a bird that could well be a robin. In the letters, Dickinson refers to herself as Daisy.

Here are some sample lines. The first letter—from Spring 1858—is reproduced below (beginning four lines from the bottom of the left hand page; click on image to enlarge) and is taken from The Master Letters of Emily Dickinson, edited by R.W. Franklin: 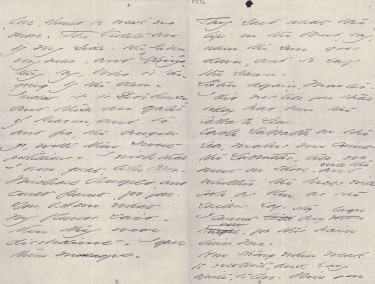 Oh—did I offend it—
Daisy—Daisy—offend it—who
bends her smaller life to
his meeker every day—
who only asks—a task—
something to do for
love of it—some little way
she cannot guess to make
that master glad—
A love so big it scares
Her, rushing among her small
heart—pushing aside the
blood—

Master.
If you saw a bullet
hit a Bird—and he told you
he wasn’t shot—you might weep
at his courtesy, but you would
certainly doubt his word—
One drop more from the gash
that stains your Daisy’s
bosom—then would you believe?

A frame with no image, nothing to latch words onto. “Open your life wide, and take me in forever.” Might not these—in some parallel universe—be Dorothy’s words to Jeffrey?