by Nicholas Rombes
in Columns, Filmmaking
on May 9, 2012

This shot comes at the beginning of a montage that unfolds in this sequence:

5. back to Jeffrey on bed, crying, camera dollying in: 8 seconds

7. back to Jeffrey on bed, crying: 4 seconds

8. flashback to bedroom door in Ben’s apartment where Donny is held; “no Donny,
Mama loves you!”: 3 seconds

11. back to Jeffrey crying, broken down: 13 seconds

The shot is disorienting: is Jeffrey in his childhood bedroom? Immediately after the black screen, he will emerge at the breakfast table, joining his Mom and Aunt Barbara. And yet earlier in the film he emerges from a door at the top of the stairs, goes down to where his Mom and Aunt are watching a film noir on television, and tells them he is going out. The implication is that he’s coming downstairs from his bedroom, and yet this shot seems to be of a first-floor room judging from what’s outside the window in this and subsequent shots.

Ultimately, it’s a minor detail in a strictly narrative sense. We simply don’t need to know precisely what room of the house Jeffrey is in; what’s important is that we see his pain, his regret, his guilt, evidence that he is not simply a cold voyeur, but rather someone whose actions have revealed the repressed monster that dwells deep inside him. And yet, the unfamiliar room that we find Jeffrey in contributes to our own disorientation: where, precisely, are we? And that thing (a mouth?) hanging on the wall behind him . . . it made an appearance earlier, after Jeffrey awoke from nightmares following his first session with Dorothy: 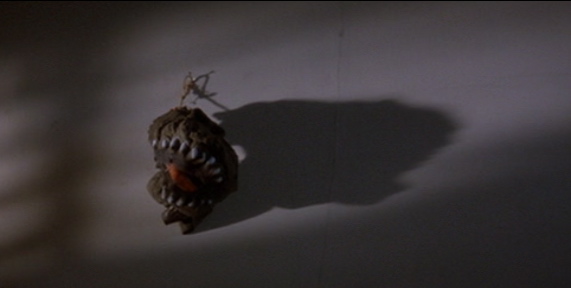 Loaded with signals and crossed signals, the frame at second #5264 collapses in on itself, generating its own black hole where everything disappears, leaving behind only traces of meaning, fragments, like that screaming mouth on the wall.

NOTE: The Blue Velvet Project will return on Monday, May 14 with post #113.