by Brandon Harris
in Filmmaking, Post-Production
on May 17, 2012 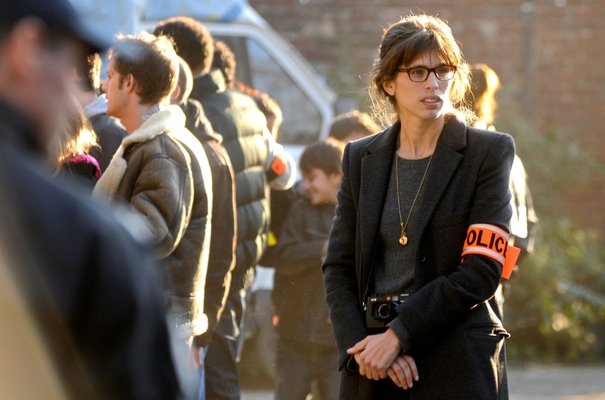 Actress-turned-director Maïwenn, best known to American audiences for a supporting role in her ex-husband Luc Besson‘s The Fifth Element, is poised with her Cannes-winning Polisse, which opens this Friday, to leap into a class of heralded young international auteurs. As much a revealing picture of the diverse, modern French middle class as it is a ripped-from-the-headlines police procedural epic, it presents the roller coaster day-to-day reality of a devoted but all-too-flawed group of cops in the Parisian Child Protection Unit as they investigate various crimes against minors, depicting their lives with a delicate but surprisingly effective mix of gallows humor and harrowing tragedy. “On paper, the subject made people freak out,” remembered Maïwenn during a recent interview. “They were like, no, no, no, no, we don’t talk about kids, we don’t talk about pedophiles, we don’t talk about incest. Another movie about cops. Blah, blah, blah.”

Rigorously researched by its director/co-writer/co-star, Polisse is a robust and improvisatory riff on the hour-long American cop show format. Startlingly ambitious if not completely successful, it is a reminder of how thrilling it can be to watch an interesting filmmaker take apart a genre from the bottom up. “I’ve seen lots of movies about the police — French movies, American movies — and one thing I noticed is that all the movies were directed by men,” claimed Maïwenn, who says she was inspired to make the film by James Gray’s We Own The Night. She was drawn to the specific subject matter by various documentaries she had seen about Child Protection Units on television and then spent the better part of two years writing the script with her co-writer Emmanuelle Bercot, who also acts in the film. “Of course the sensibility is not the same when it is a woman who is the director,” she says. “It’s always about the gang brigade, the drug brigade, it’s like cowboys and Indians. Emotion is the subject of my movie.”

Indeed the film is at its strongest when it visits upon the private lives of police officers hunting child predators. Dispensing with exposition altogether, the film throws you right in the heart of several ongoing cases being pursued by its half a dozen CPU members, allowing various characters, and their lives off the streets and outside the precinct, to emerge and gain significance slowly, through the accumulation of screen time in short, freewheeling scenes that oscillate between high drama and tough humor. “All my movies are talking about what it’s like being a kid, what it’s like being a mother, what it’s like being a parent — it’s kind of my obsession,” remarked the 36-year-old filmmaker, whose newest movie at first glance is a much less self-contained and autobiographical project than her previous two features, Forgive Me and The Actresses’ Ball. “Although people think that this is more of a fictional movie than the others, that’s not true. I feel like all my movies are talking about me and even when they’re not talking about me, it’s all the same process.”

When Polisse does leave the precinct and the streets behind and peers into the private lives of its colorful group of cops (arguably the film’s best scene is at a club where several of the cops go to celebrate a case that has a rare happy ending), the movie delves into the emotional rigors that members of a child crimes unit like this face and describes why the lives of the police are underappreciated in general. Without any sort of heavyhandedness, the film manages to effectively dramatize the evolution France’s national identity is undergoing while never taking its eye off the lived circumstances of these cops, the children they manage to protect, and the children they don’t. Brisk despite its two-hour-plus running time, Polisse is hard to shake and harder still to forget.