KICKSTARTING “DAYS OF GRAY” IN ICELAND

We are Ani & Cailin, founders of the barely one-year-old Bicephaly Pictures, and we’ve embarked on a wild journey to make our first feature film: Days of Gray. It’s a modern-day fantastical silent film, scored by the amazing Iceland band Hjaltalín. The story follows an 11-year-old boy who lives in a timeless, barren land. His entire community must wear face masks outside to protect themselves from an epidemic that caused the people in the village next to theirs to develop strange animal mutations. The men on the boy’s side first erected a wall to keep them out and then ultimately ended up killing all of them. One day the boy discovers a girl with gill-like openings on the sides of her face: she’s the only survivor from the other side and has been living in hiding her whole life. The film follows the two of them as they overcome their fear of each other and, in the end, become friends. 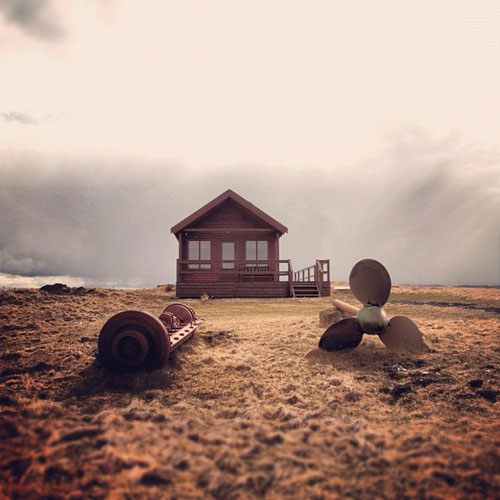 We’ll be filming in July, and we just returned from ten days of non-stop meetings, casting sessions and location scouting adventures over lava fields and craters.

– choose a camera and test it

and have more meetings a day than we could count!

We started by planning at our New York City headquarters (read: home office) with the help of Rebekka Bryndís Björnsdóttir, our associate producer and the talented bassoonist of Hjaltalín. Rebekka got in touch with the Reykjavík Performing Arts school, who recommended 27 young children, aged 8 to 13, to invite for the casting session. From 10 am to 6 pm, we saw all 27 children in rapid fire, with only 15 minutes intervals. Some kids had perfect English, some little to none, but Hrafn Jonssón, our Icelandic friend and scriptwriter, was thankfully there to translate. 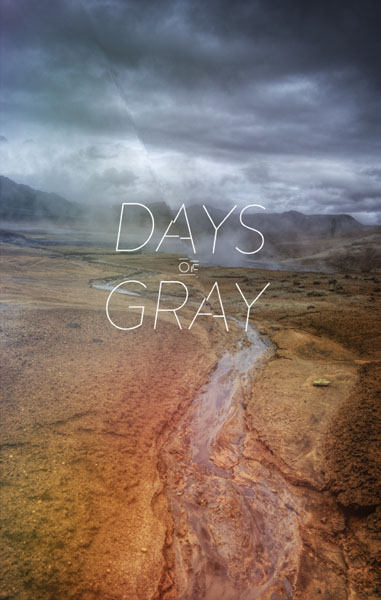 Casting for a silent film is tricky, since there are no lines of dialogue to try out, yet the actors need to express the entire story through their facial expressions. We simply told the children the film’s plot and watched their reactions, looking for the most captivating and expressive faces, trying hard to avoid falling for the cutest and most classically beautiful ones.

We asked them about themselves, and watched how they interacted with us and each other, while Cailin filmed each one as a screen test as well to best match up familial resemblances.

In the end, the choices were obvious, we came out with the best possible boy, girl and sister with little deliberation. Interestingly, they all had a background in dance or sports (ballet, gymnastics, parkour…) but perhaps it was their spatial awareness, discipline and enthusiasm that shone through.

Casting the adults was more about starting a conversation about their roles. The adults in the film are incredibly complex, neither caricatures nor villains. We spoke at length about conveying their importance in making this a film about children, that isn’t a kid’s movie.

For the locations, we were on the hunt for a house, a grotto, a lake, a lava field and an ice cave. Luckily, Iceland has all of these and more, only an hour away from the capital! 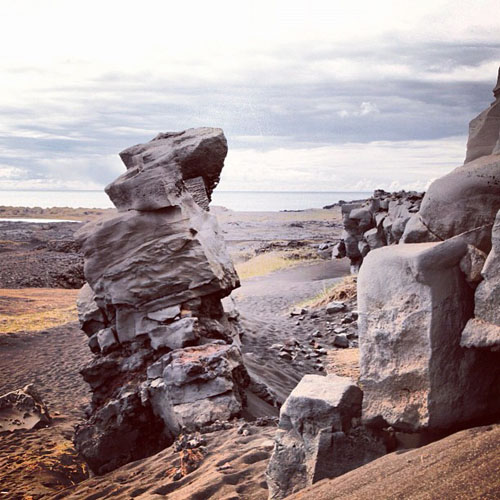 The lava fields are straight out of Mars, cragged formations jutting out at random, and at times towering over our heads at precarious angles. Perfectly suited for the look we’re going for: stark, barren and uninviting. We had to keep in mind the change of seasons, to make sure our ideal grayscale landscapes wouldn’t turn bright green in the summer, when Iceland’s famously thick moss covers the rocky hills.

We had two location scouts, Arnar (who is now fully part of our renegade crew) and Rebekka’s father, Bjorn. On the day we went out with Bjorn, he prepared a map of houses to explore and drove us on a loop through the southwest coasts of Iceland. Rebekka’s mother packed us amazing egg salad sandwiches to fuel our energy as we ventured forward in search of the perfect house. Seeking something not too old and dilapidated yet not too new, we inspected abandoned summer homes and ancient stone peasant dwellings. We ruled out a studio build due to budget constraints — in fact, all the pre-production costs and part of the production budget will be covered by our Kickstarter! – but managed to find just what we needed.

The wonderful thing about Iceland is that people were incredibly responsive to this kind of art film. Everyone we met pursues art as a way of life, through painting, photography, music and simply creating beauty. They really got the project, and were so incredibly supportive that we thrived off their enthusiasm and genuine interest for the project itself.

Our amazing friends from France and the U.S. introduced us to one or two people, who not only turned out to be exactly the right people to know but also shared their own friends and connections. Runar, an incredible commercial and music video director, is represented by Pegasus Productions, who despite being too swamped with other projects to come on board as co-producers, were fantastically helpful in sharing their email address books and suggesting production services. Shayna, our friend in New York, put us in touch with Megan who is now helping with the scriptwriting and story. By total coincidence, her husband, Sruli (www.srulirecht.com), is a fashion designer whose work we’ve been looking to as inspiration for the film’s costumes!

Coincidences abounded, through fruitful encounters at our mobile offices in the lovely coffee shops of Laundromat and Kex. Over our coffee, we met Sunna, founder of Icelandic Cinema Online (ICO), and Gigja, a trilingual (English/French/Icelandic) marvel who will be our P.A.!

Arnar, Rebekka’s friend, who happened to have coded ICO’s website, hooked us up with the only Canon C300 in the whole country, so brand new that it’s even nearly impossible to rent in NYC.

We also caught up with Mark Friedberg, who Ani and Nell worked with on The Tempest, Morning Glory and …who happened to be in town preparing for Darren Aronofsky’s Noah, also coincidentally shooting this summer, along with Ben Stiller’s new flick and three other big Hollywood hurrahs — apparently word’s gotten out about incredible Iceland!

In those short ten days, we also managed to spend eight straight hours one day to entirely overhaul the script and flesh out in detail each character’s backstory and thoroughly question every plot twist and story arc.

Some things just need to be done face-to-face, in the field, in real life, to get things done.

To help fund this project, visit the Days of Gray Kickstarter page.