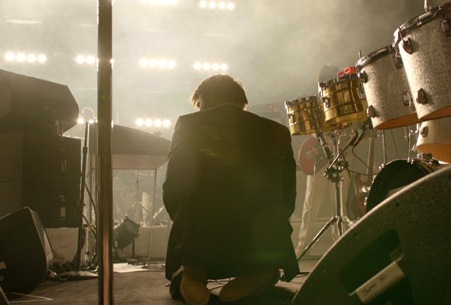 Oscilloscope Pictures today announced a unique release strategy for Shut Up and Play the Hits, Will Lovelace and Dylan Southern’s documentary on the last days of LCD Soundsystem, which bowed at Sundance earlier this year.

Instead of the usual platform release for a film like this, Shut Up and Play the Hits will open on July 18 at theaters around the United States — and end its theatrical run the same day. In short, this concert movie will, um, play the hits and shut up. (Is this the first time that a film’s title has inspired its release strategy?!)

Oscilloscope already has a long list of theaters with screenings set up, but if there’s no venue near you that’s showing the film you can also request a screening through Eventful. Will you be more likely to see the film if you have just a single day to catch it? Or is this gimmicky release somewhat self-defeating?

From a purist’s perspective, having a theater full of passionate LCD fans at each screening will definitely make for a much better viewing experience, as there’s no worse way to watch a concert movie than with a small and unenthusiastic audience.