by Nicholas Rombes
in Columns, Filmmaking
on Jun 13, 2012

Sandy and Jeffrey, on their way to the dance in the basement of a house.

Jeffrey tends to arrive and depart the Williams house at night.

The car creaks as it moves.

What space does the car drive though? The space of streets at night, the insides of stores illuminated like enormous aquariums behind Sandy.

But also the space of a mind, the mind of the film, with its own series of codes that reference other films, other images.

Everybody has a subconscious and they put a lid on it. There’s things in there. And then along comes something, and something bobs up. I don’t know if that’s good. (from a 1977 interview)

Making films is a subconscious thing. Words get in the way. Rational thinking gets in the way. It can really stop you cold. But when it comes out in a pure sort of stream, from some other place, film has a great way of giving shape to the subconscious. It’s just a great language for that.
(from a 1995 interview)

How does a film think? Is it aware—beyond the intentions of its makers—of the associations it generates in the minds of its viewers? Could Blue Velvet possibly know that a young reader—let’s call her Evelyn—in the year 2012 was given the graphic novel King of the Flies 2: The Origin of the World, by Mezzo and Pirus (Fantagraphics Books, 2011) 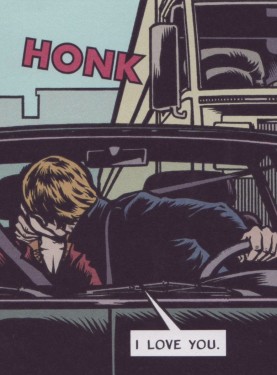 from King of the Flies 2: The Origin of the World

and that on page five of that very book there is a panel that captures what should have happened in the moments after the Blue Velvet frame at second #5781? If at some terrible point in the future, Evelyn is cut-off from images, perhaps she will remember The King of the Flies panel as being an actual frame from Blue Velvet, a missing frame, that would have ended the film right there, in a kiss, in a car, before the terrible events that are about to happen, the blood that is to be spilled, the brains that are to be splattered, and in those brains (the brains of the Yellow Man) human thought, stuck to walls and fallen onto carpeting, and the brains of Frank, blown out into Dorothy’s apartment, and earlier Dorothy with Jeffrey’s seed in her, naked in the street, and the way the Sandy’s boyfriend Mike will recoil in horror, assuming the thankless role of the audience, and Jeffrey’s evil Aunt Barbara at the end, disgusted at the robin that Sandy has staked her salvation on, and Evelyn still in withdrawal from images, coiling her thoughts tightly around the last two images that she can remember, one from a film and one from a graphic novel separated by decades but telling, essentially, the same story of goodness in a doomed world.