by Nicholas Rombes
in Columns, Filmmaking
on Jun 15, 2012

At the basement party, Sandy has just assured her friends that it’s okay that she’s there with Jeffrey, not Mike. “It’s all taken care of,” she’ll tell Jeffrey in a few seconds, as “Mysteries of Love” is about to begin.

They were asking a lot of money for the [“Song to the Siren” by This Mortal Coil] track, and we didn’t have any money. At one point Fred Caruso said, ‘David, you’re always writing little things. They could be called lyrics. Why don’t you write something and send it to Angelo and he will write you a song?’ . . . So Angelo wrote ‘Mysteries of Love.’ At first it wasn’t what it is now: same melody, same words, but it had a completely different feel. So I talked to him, and then I started falling in love with this thing. And he got this friend of his—Julee Cruise—to come in and sing it in a different way. And I said, ‘Angelo, why don’t you score this picture?’ I wrote the script listening to Shostakovich, so I told Angelo about that, and Angelo starts going to work. (From Lynch on Lynch, by Chris Rodley)

In March 1985, Ronald Reagan said during a question and answer session with the Magazine Publishers Association of America that “I’ve been accused, I know, of being a believer in Norman Rockwell’s America; and that’s one charge that, as a small town boy and a reader of the old Saturday Evening Post, I’ve always willingly pled guilty to that charge.”

There is the fact, in this frame, of ladies done-up in their hair.

There is no hint yet of grunge, which would begin to creep into the national consciousness with the Deep Six compilation album (featuring Soundgarden, The Melvins, and others) in March 1986, around six months prior to Blue Velvet’s release in the U.S. when flannel shirts, as in this 1987 Sears ad featuring Cheryl Tiegs, would begin assume a coded, detoured meaning. 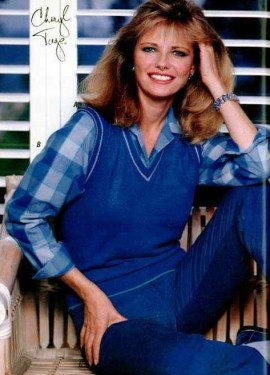 And there is also this from the Blue Velvet era, from another basement on the other side of the country:

The reversal of Jeffrey. His opposite. Body turned against a wall. Not curious but closed off. Fast, not slow. And yet both Jeffrey and Cobain are interested in sound, and the passageway that sound takes though the ear into the mind. Two distinct signals from different outposts of the Reagan Empire.