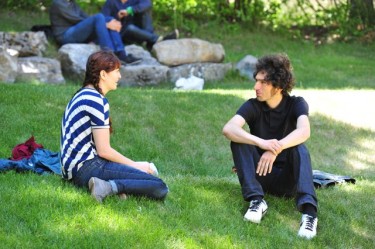 Marielle Heller, a New York-based screenwriter, actor and playwright, is attending the June Sundance Directors Lab with her project, The Diary of a Teenage Girl. “In the haze of 1970’s San Francisco, a teenage artist with a brutally honest perspective tries to navigate her way through an affair with her mother’s boyfriend,” is its description, and the film is being adapted from the graphic novel by Phoebe Gloeckner. Here is Heller’s second post from the Sundance Resort in Utah. Read the first here.

The way the Sundance Lab is set up, you don’t always know how or when you’re going to get your lesson for the day. It’s the end of our production time here. I have shot four scenes and am editing my last. During my second scene, the assistant camera operator, Jason (aka JBall) became my inadvertent teacher regarding racking focus. As we shot, he would let me indicate where I wanted the focus to land, and let me play with the same scene over and over until I could perceive the emotional effect of changing focus. It wasn’t planned, and it couldn’t be, but it was invaluable. Here are some other unexpected lessons from this week:

Tuesday June 12th. I finished editing my biggest scene, a two-day shoot that culminated in my main character dunking her head back into the bathtub and re-emerging in the Ganges River. Lesson learned: layering practical shots of fake plants around a bathtub, fish swimming, and trees rustling can create magic. A good lesson for indie filmmaking — it doesn’t have to cost a ton to make your heart jump.

Thursday June 14th: Shoot day. Lesson learned: thinking a day will be fun and easy can be the kiss of death. In order to make a scene feel effortless you probably have to do a crap ton of preparation. This seems like an obvious lesson but it is hard-earned. On Thursday the day started to get away from me. Time was moving way too fast, I didn’t make a clear shot list and we were never going to make our day. My brain was short-circuiting. So with an hour and a half to go, we jumped into high gear. We got clear with what we needed in order to finish and started hauling ass. Creative Advisor d.p. Bob Elswit recognized the excited fury and started rigging lights to help us get our set up. A group mentality sunk in. With 10 minutes to go we got into places for a complicated dolly shot, without which the scene wouldn’t work. We hurried into position, Ben Kasulke, d.p. extraordinaire, whispered, “Good luck everybody” and I called “action.” The shot looked great, but more than that, we finished off a tough day as a unified group — a force to be reckoned with.

Friday June 14th. Edit of previous scene. Lesson learned: the ratio of real time to edit time is 6:1 (it flies by.) With an hour and a half to go in our edit, Jen Lilly and I realize we have to change course. The scene needs something different. Similarly to the shoot day before, we start working at a furious pace. Speaking in fragments, planning five edit steps ahead of the computer, Bobby Fischer style. Angela Bassett sits behind us watching us work. I was nervous that it was a bad time to be observed, a scramble to the finish. But the next day at my evaluation, Angela compliments how I kept my cool and stayed steady in that last furious hour. Not at all what I expected.

Saturday June 15th. Advisor Screening and evaluation of the week. Lesson learned: you actually do learn more from making mistakes than from doing everything well. With this challenging scene shot and cut, I had realized I hadn’t gotten the scene the way I had hoped. I had made some in-between choices and with time running out, I did whatever I could to finish. I admitted all of this to the advisors at the start of the critique and to my surprise, rather than critiquing the scene they ended up talking more about how I handled myself in the process. They noted that although I didn’t end up with the scene I hoped, I was able to quickly see my mistakes and change course. A necessary skill for being a director. I went from feeling like crap about my scene to proud of how I responded to my mistakes.

Now I have to figure out how to keep all these practical lessons about directing and myself in my head. I want to remember them for when I make my movie, and hopefully when I’m having a tough day on the set or in the edit room I can look back on this lab and remember all these people who patiently helped me become a director.

(Above photo: Marielle Heller at the Sundance Labs with director Azazel Jacobs. Photo by Nick Kenworthy.)