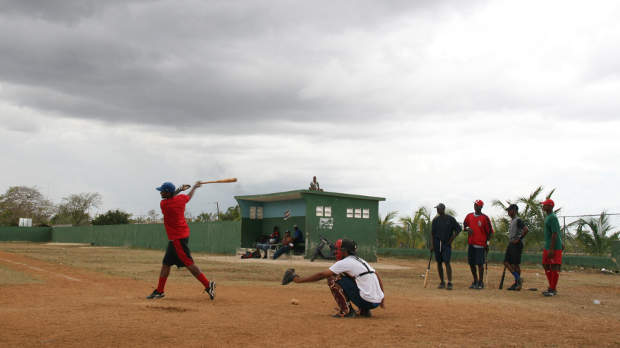 by Brandon Harris
in Director Interviews, Directors, Interviews
on Jun 28, 2012

Although its population is just 2% the size of the US’, the tiny, impoverished Caribbean nation of the Dominican Republic accounts for a fifth of all the young men who go on to become Major League Baseball players. How such an astounding share of pro baseball players come from the DR was what Jonathan Paley and his co-directors Ross Finkel and Trevor Martin set out to explore in Ballplayer: Pelotero. However, what they discovered was that, in addition to being a country ripe with baseball talent — one that the MLB has spent considerable resources mining for the past 50 years — the Dominican Republic was a place where the dream of escaping poverty is often tied to being a part of a corrupt and demeaning system, one in which a very wealthy and powerful league may be using nefarious means to drive down the most talented players’ asking price and where these young men and their families will use every means necessary to give themselves an advantage, most notably lying about their age. Traversing much of the same terrain as Ryan Fleck and Anna Boden’s wonderful Sugar, Pelotero takes us into a riveting world of unkempt ballfields and decaying bungalos, where the American Dream seems so close and strangely elusive.

Ballplayer: Pelotero follows two prospects, Jean Carlos Batista and Miguel Angel Sano, who are both on the cusp of signing with major league teams, something these players can only do once they’re 16 years old. Both shortstops, Sano seems destined for superstardom and a multi-million dollar signing bonus, being one of the most highly touted Dominican prospects in some time. When doubts creep up about his real age, however, fickle scouts start to disappear, along with their team’s offers. Through him and Batista, a promising but more limited player who may think he’s worth more than any major league team will be willing to give him, we catch a glimpse of the unique pressures these men face, as the trajectory of their whole lives boils down to the outcomes of dozens of team tryouts and backroom hand-wringing.

Narrated by John Leguizamo and executive produced by Boston Red Sox manager Bobby Valentine, Ballplayer: Pelotero has enjoyed an impressive festival run, having made stops at IFFBoston, Sarasota, Hamptons, Miami and Cleveland. This past weekend it shared the jury award in the Aruba International Film Festival’s Caribbean Spotlight Series. Paley, who is based in New York, chatted with Filmmaker in advance of Ballplayer: Pelotero’s July opening at the Maysles Cinema in Harlem. 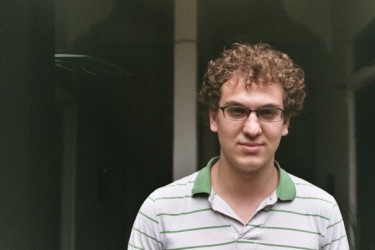 Filmmaker: How did you first become interested in the world of Dominican baseball and how did that interest lead to this film?

Paley: I was a big baseball fan. A big Orioles fan. So there’s not a lot to look forward to. [laughs] So I started following the minor leagues instead. I started seeing more and more Dominican ballplayers down there. The teams are just filled with them, way more than any of the other Latin guys. I just became curious. I wanted to find out how this system produces so many ballplayers so [much more] effectively, for so much less money, than any other place in the world.

Filmmaker: What were the first steps you took? Did you have any connections into the world of pro baseball at the time?

Paley: We had a couple down there. I was still in college at the time, so I wrote a grant and we went down there for a research trip for a couple of weeks. We had one or two connections through friends of friends, but we really just started showing up places. We spent the next nine to 12 months raising money so that we could go back and when we did, it was just a matter of showing up. We knew what city we had to be in. We would drive around until we found the baseball fields and then we would show up day after day after day and eventually we gained people’s trust.

Filmmaker: The film focuses on two specific prospects, both young Dominican shortstops. Why did you settle on those two?

Paley: Well, we started with five. We went down there with some archetypes in mind. We knew we wanted a star and we knew we wanted sort of a fringe player. We identified five guys who we started following and for one reason or another, three of them had to be eliminated. One of the trainers of one of the kids was involved in a scandal at the time. He stopped answering his phone and kind of cut us off. So we had to cut him from the story. Another one of the kids was older, he was 18. The purpose of his story was to show very visually how once these guys pass 16, 17, they are old men. Ultimately, we were able to convey that through the consequences of Miguel and Jean Carlos’ story without having to add a whole other character. The fifth guy was kind of a long shot prospect to sign. The problem with a long shot is that nothing ever happens. So it was kind of hard to tell this story.

Filmmaker: Did you always know it would have the size and breadth it has thematically?

Paley: Well, we always set out to make a feature; what we didn’t know was that it was going to turn into the expose it did. We set out to make a really positive story about how baseball provides a way out for these kids and it provides a pipeline to the majors for some of the best talent in the world. What we discovered when we got down there is that the system is much more intricate and much more complicated than we ever would have imagined. That was one of the biggest challenges in telling the story was that brushing away the spare parts and distilling it down to the absolutely necessary information for the audience.

Filmmaker: What was the most difficult aspect of making the film work in post?

Paley: It was a fantastically difficult edit, more so than we ever imagined. All the credit goes to our two editors, Mary Manhardt and Isaac Solotaroff, who really shaped a lot of the film. There is so much explication of knowledge for you to be able to understand what happens to Miguel and Jean Carlos in order for you to feel that emotional punch in the third act for both of them. Through the first couple cuts of the film, we were looking at 25 minutes of just explication, of setting the scene. It just wasn’t working. They were really instrumental in sort of trimming the fat, in figuring our what the audience needs to know and didn’t need to know.

Filmmaker: Have the subjects seen the film?

Paley: They’ve both seen it.

Filmmaker: What do they think?

Paley: They love the film. They’re happy to have this record of the process of signing.

Filmmaker: Toward the beginning we see Jean Carlos in a more positive light, an underdog of sorts, where as Miguel is seen as a cocky braggart, a natural talent who perhaps takes it for granted. By the end, however, once it becomes clear that perhaps Jean Carlos and his family have been less than forthright about certain things and Miguel is seemingly being victimized by the entire baseball establishment, we see them differently.

Paley: Miguel has this preternatural talent, but he’s also a goofball, a likeable guy, someone that when you meet him, he’s always got a smile on his face. We didn’t know what to think when the rumors started swirling. We wanted to believe that he was the age he said he was. But look at him — he looks like a freak! His body makes him look like he’s 30. So it was an easy lie to believe, but ultimately we trusted his family and the trainers that he was who he said he was and we still believe that today.

As far as Jean Carlos goes, we were very surprised, just as surprised as his coach is in the film. We had no idea that that was coming and we were just as taken aback. It’s hard to take a moral stand about Jean Carlos and the dozens of other players in the Dominican who’ve been caught lying about their age because their lives are at stake. I don’t want to condone lying, but if this one thing is going to make the difference between them living a life of poverty or having the opportunity to sign, can you blame them?

Filmmaker: Of course not. One of the more interesting aspects of the film is when you follow the courtship between a scout for the Pittsburgh Pirates and Miguel Angel Sano and how for the scout, working for a small-market team, must do everything in his power to get a player like Miguel signed while he’s still relatively cheap. Ultimately, it’s almost as if he and other scouts for organizations like the Pirates may be willing to bend the rules a bit to make that happen and find ways to effectively push their market disadvantage down onto these players.

Paley:  In some sense, although Miguel is a special case. What happened to Miguel should have never happened. The system was taken advantage of. He should have signed for the largest bonus ever given to any player from the Dominican Republic. Teams like the Pirates, small-market teams, tend to invest heavily in places like the Dominican Republic because you get more bang for your buck there than you do, say, in the draft. I wouldn’t say that they necessarily push their major league disadvantage onto these players, but everY team is going to do anything they can to sign a player for the least amount of money possible. Some are willing to have less morals than others about it, I guess.

When free agency came in, there were lawsuits that happened because all the teams were basically colluding not to pay the free agents, so it wouldn’t surprise me if one day there was smoking gun evidence presented that similar things are happening in the Dominican Republic. I don’t know if I should speak to that subject, though. [laughs]

Filmmaker: Has anyone from Major League Baseball seen or reacted to the film in some way? While not a damning portrait, it certainly makes it seem like applying these onerous market forces on very poor young men doesn’t seem quite right.

Paley: Well, officially Major League Baseball chose not to comment about the film or what was in the film. There’s nothing I can really speak to on the record about it.

Filmmaker: How did Bobby Valentine become involved in the project?

Paley: We shot the film in 2009 on our own. When we came back, we had this great film in the can, but we were out of funds to finish it. Through synchronicity, Bobby had just started a production company to make sports documentaries and I was connected with them through a friend. It was perfect timing for both of us. They were able to take us on as their first project.