Coverage of a Different Kind

The four-to-five week run of New York Film Festival screenings and press conferences each fall functions as something of an annual end-of-summer camp for a certain caste of mostly local film journalists. The series of videos shot, directed, edited by and usually starring Jamie Stuart which document this ritual should be, then, something of a camp yearbook… except that over the years Stuart has only rarely seemed interested in directly documenting the festival itself. He uses the experience of the NYFF — its films, visiting filmmakers both relatively obscure (Hany Abu-Assad, Hong Sang-soo) and unquestionably famous (Warren Beatty, Nicole Kidman), his commute, his permanent fatigue, Lincoln Center and its inhabitants, the daily breakfast provided by the Film Society, his daily lunch procured from Burger King — as raw material for a series of personal mediations on a month spent in the highbrow cinema dunk tank. 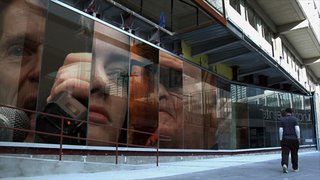 Stuart first documented the NYFF on video in 2004. Certain tropes were established early on, particularly point-of-view shooting and Stuart’s noir-ish voiceover (typical line: “I grabbed a cup of pick-me-up, then hunkered down for the movie”). As festival exhaustion set in, Stuart was increasingly taunted by b&w cartoon cutouts, first masculine and mockingly raising middle fingers, and then — after Stuart declared The World a “masterpiece” — tiny, flying Olsen Twins. But aside from occasional diversions into unexplained surrealism, these early pieces were pretty straightforward critical diaries. Stuart’s tongue only seemed to be slightly in cheek, best evidenced when Notre Musique prompts him to offer Jean-Luc Godard the following advice: “Quit criticizing other successful, modern filmmakers, and just concentrate on making a successful film of your own. Jesus.”

When NYFF43 rolled around, Stuart dropped both the diary format and the direct critique. The first NYFF43 episode centers on audience member Nobuhiro Hosoki. In dispassionate voiceover, Stuart tells us that Hosoki admires George Clooney (at the festival representing Good Night, and Good Luck) because he “has sexual intercourse with women so exclusive no average human has the opportunity to ever come in contact with them in their lifetime.” Once Clooney takes the stage, Stuart tells us, “a gradual feeling of elation swept over” Hosoki, We watch him snap photos until a wide smile spreads across his face. With the next cut, we see Hosoki levitating at the top of the Walter Reade, as if the mere sight of Clooney functions as a fizzy lifting agent. In the next episode, a Philip Seymour Hoffman super fan also finds himself floating, this time above the Capote press conference. “How this bizarre experience had changed them, nobody could tell,” Stuart intones, after his floating boys have returned to Earth. 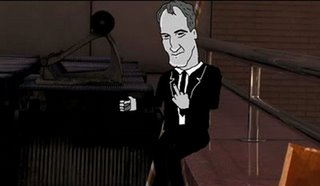 During the NYFF44 series, Stuart would complain about the gulf between the practical hassle of covering a film festival and the glamour of it presumed by “average” ticket buyers — he calls it “a gaping chasm between the fantasy screen, starpower, and my reality.” And yet, somewhere in between cynicism and blind celebrity adulation, there’s an intimacy to the NYFF press screenings that can, very occasionally, turn a simple screening of a great film or an otherwise rote professional encounter with an admired celebrity into something like a transformative experience.

NYFF44 brought Stuart back to Stuart. In the first episode he announces that these videos will be about the process of putting these videos together. He warns that he won’t get too personal — “Ain’t showing my johnson like Swanberg,” he promises — but the NYFF44 series is exhibitionist in its own way. That year’s batch is so much about the minutia of Stuart’s process — from his struggle to secure royalty-free score music to the sexual fantasies about Penelope Cruz that get him through the press conference for a subpar Almodovar film — that the videos themselves play best as a provocation to anyone looking for traditional entertainment coverage.

In 2007, Stuart took a huge conceptual and creative leap forward. Though still attending the press conferences and pulling them into a narrative via his voiceover — and still commenting on his own production foibles — for the first time Stuart enjoyed one-on-one access to filmmakers like Wes Anderson and John Landis, and used this footage to play with notions of public and private within the layered false intimacies of both the press conference and the publicist-vetted “alone time.” Here Stuart takes his work home with him once again — in the form of an infestation of cartoon cockroaches with the face of Nicole Kidman in his apartment. The NYFF45 series seems less self-referential — even when Stuart is literally referencing himself — and more about the strange, mind-bending nature of encountering famous people in semi-intimate settings.

The NYFF45 series may be more elegant and creatively exciting than the clips that came just a year before, but the crude self-deconstruction of the earlier series is necessary to deliver the thesis that ties the whole project together. If traditional videotaped entertainment coverage tries to foster the illusion that the end user of an entertainment product has been invited to an intimate conversation with a filmmaker or star, Stuart’s NYFF coverage constantly reminds us that there is an architect behind that fake conversation. It takes the all-seeing but allegedly impartial press conference eye and restores to it the intellectual agency and emotional response of the interested but skeptical viewer. Stuart’s NYFF dispatches are not quite filmmaking, not quite video blogging and not quite journalism, but transmissions from one brain inside the press hive, without phony objectivity, without bought-and-paid-for favor, without filters.