Sundance, A Glance From the Inside

Last spring we took an exclusive look inside the Sundance Directors and Screenwriters Labs as filmmaker Braden King posted weekly stories about his experience with his project, Here, co-written by himself and Dani Valent. Now, he’s graciously given us an insight into what he took away from the Institute, including attending this year’s Festival, where he was involved in the New Frontier’s Multimedia Performance Events with The Story Is Still Asleep and Here was selected as the U.S. recipient of the 2008 Sundance / NHK International Filmmakers Award. 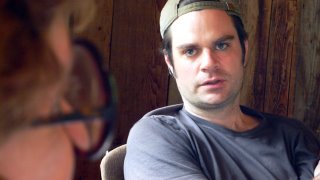 “I haven’t fought much with the past, but I’ve fought plenty with the future.”
– Patti Smith at the Sundance Main Street Music Café, January 21, 2008.

Just before the Sundance Film Festival last month, Emily Brunt from the Institute asked me if I’d be willing to put together some reflections on my experiences over the past year with the Sundance Writers and Directors Labs and, more specifically, what comes after. I was completely overwhelmed with preparations for a multi-media and live music piece entitled The Story Is Still Asleep that would soon be presented in the New Frontiers section of the Festival and I had just been informed that my lab project, Here, had been selected as the U.S. recipient of the 2008 Sundance / NHK International Filmmakers Award. It was an incredibly busy time, as was the Festival itself. (I saw one film in seven days, Man On Wire, about Philippe Petit’s infamous, unauthorized high-wire walk between the World Trade Center’s Twin Towers in 1974. It couldn’t have been more appropriate. If you don’t know the story, stop reading now, get on Google and don’t come back. This real-life, true myth contains more essential lessons about the world, life and filmmaking than anything that I could possibly write.)

At any rate, the blur of the Festival has begun to recede, the dust (snow?) has begun to settle and I’ve managed to collect a few impressionistic thoughts.

The NHK Award at Sundance capped off what was, for me, a life-changing year spent with the Sundance Institute – first at the January Writers lab and then at the June Directors Lab. People often ask what the Labs were like and I often say things like, “They were an overwhelming gift.” But that doesn’t really do the experience justice. The totality of it is difficult to articulate. At some point the Labs begin to transcend being solely about filmmaking. They really do. They end up being about something much larger, something that revolves around getting to the deepest and most resonant places that you can find within yourself and those around you.

And then you come out. And it’s kind of sadistic – after the January Writers Lab, which takes place at the Sundance Resort, high in the idyllic Wasatch Mountains, they take you over to the Marriott in Park City and kind of kick you out of the van, out of their warm, perfect womb and into the cold, hard, hassle-filled reality of the Sundance Film Festival’s first weekend, which is a madhouse. I went from a luxurious and cozy mountain cabin with its own fireplace and kitchenette to a cold, ratty, basement motel room with a shower that barely worked. Which mirrors the metaphoric journey you undertake coming out of the Lab – from a warm place of pure creativity toward a direct confrontation what can feel like a very frigid business landscape for independent film. 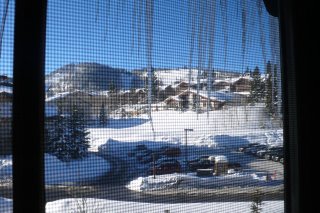 TOP OF PAGE: BRADEN KING. ABOVE: THE VIEW FROM BRADEN’S CONDO AT THE SUNDANCE FILM FESTIVAL.

Because once you come down from the mountain and survive that initial splash of cold, hard reality, you start to go about the actual making of your film and you start to hear a lot about what a difficult climate it is out there and “how are we going to market this?” and “who is your audience?” and “it would be great if all we had to care about was the art but that’s not the world we’re living in and and, and, and, and…

Well, we live in the world we accept.

So rather than writing about how crazy it is to begin to try to orient yourself in the “industry,” I wanted to write about a few ideas that have been forming as I’ve begun to slowly wade into these (most definitely shark-infested) waters.

Jack Kerouac, when asked to give a talk on the question, “Is There a Beat Generation,” began with the following introduction: “What we really should be wondering about tonight is ‘Is there a world?’ And I could go and talk for five, ten, twenty minutes about ‘Is there a world?’ because there really is no world. Sometimes I’m walking on the ground and I see right through the ground. And there is no world. And you’ll find out!”

My current project, Here, is a landscape-obsessed road movie about a brief but intensely affecting journey that is undertaken by satellite mapping engineer and an art and landscape photographer who impulsively decide to travel together into uncharted foreign territory – literally and metaphorically.

It has been an attempt to make a film that felt personally essential; an attempt to confront an unavoidable place and to find my way into something that I simply could not NOT do. And I recently realized that it is, at least in part, a film about whether we choose to live in a world we accept or in a world that we create.

While I was trying to navigate Sundance this year, a series of questions kept recurring inside my head: “Is this Festival (love it or hate it) – is the Institute – is the NHK Award, given with so much hope and so much trust to projects that are not yet realized – is any of this result of people who lived in a world they accepted?” The answer, obviously, is no. These are people who live in a world they created. They are people who live in a world that they are constantly creating. And that realization was an incredible source of strength and inspiration as I ran around the festival trying to figure out if there was anyone out there in the “film world” with whom I might share a compatible vision. 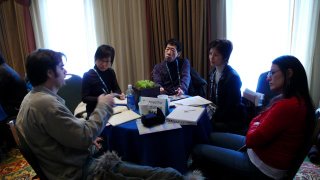 BRADEN (LEFT) AT AN NHK MEETING AT SUNDANCE.

What I finally came to see is that the “reality of the market” does not exist. The “reality of the market” is what we allow it to be, what we, as creators, choose to accept. If my time with Sundance has taught me anything, it’s that we have to create our own realities; that we have to create the world that we want to live, work in and create in. As filmmakers, we have a responsibility to be as creative with the lives and the business of our films as we are with the films themselves. We have to fight for what we believe in and for the world we want our films to live in. Period.

Listen to John Cassavetes (from the completely essential Cassavetes on Cassavetes): “The main thing is to support art. If we, the artists, kill our own avenues of working – the theater, film, etc. – we ourselves suffer. The movies are not dead. And if somebody says to you. ‘Ah, I don’t know, this picture’s not going to make money,’ or ‘That play’s never gonna make it,’ you’ve got to attack them. You’ve got to attack them! Because they will only get away with that social custom if you don’t protect your art. And if you don’t, then next year you will come into a dead business and you’re going to suffer. Find the people that you want to emulate and support them. No matter where they are and what form of art – whether it’s music or anything. Support them because they are later on going to be your support – by keeping that pure thing alive.” 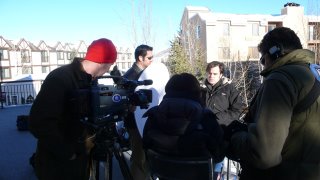 Looking back on the past year, I see this idea as the heart of what the Robert Redford and Sundance Institute’s vision is all about. As I move forward with Here, and get caught up in the “reality” of fundraising, logistics, casting, “marketing,” etc., that sense of possibility feels like the most priceless gift of all the priceless gifts that came out of my experience with the Labs, and the one that I feel the most passionate about continuing to fight for and to help realize.

We all live in the world we create, if we are willing to create it.