by Nicholas Rombes
in Columns, Filmmaking
on Jul 16, 2012

1. Jeffrey’s reaction to the violence that has happened in Dorothy’s apartment shifts gradually in the moments that follow this shot from numbed horror to sorrow, as if what he sees before him (Dorothy’s husband and the Yellow Man, tortured and dead or dying) is in some sense the awful answer to his curiosity.

2. From Charles Musser’s The Emergence of Cinema: The American Screen to 1907:

Sex and violence figured prominently in American motion pictures from the outset. In fact, such subjects were consistent with the individualized, peephole nature of the viewing experience: they showed amusements that often offended polite and/or religious Americans.

3. Jeffrey’s skinny white tie, the fact of it there, an empty signifier or a New Wave signifier?

4. From Theodore Cateforis’s Are We Not New Wave?

As contemporary as ‘Video Killed the Radio Star’ [aired on MTV in 1981] undoubtedly was in its time, on second glance what’s so striking is how much of its modern visual and musical style is pilfered from a previous era’s version of modernity. Downes and Horn [the Buggles], who are both pictured at their instruments wearing skinny ties and matching synthetic blazers, represent a direct throwback to the mid-1960s. 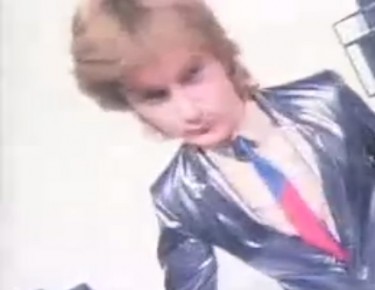 5. The scene of the crime has always been sweet-bruised Dorothy’s apartment.

6. From Brigit Pegeen Kelly’s poem “Blessed is the Field”:

He takes up his ominous clucking, fretting like a baby,
Lonely sweetling. It is hard to know the right way
In or out. But look, the goldenrod is the color

Of beaten skin. Say: Blessed are those who stand still
In their confusion. Blessed is the field as it burns.