by Nicholas Rombes
in Columns, Filmmaking
on Jul 25, 2012

In an essay from 1929, “The Filmic Fourth Dimension,” Sergei Eisenstein wrote about the impossibility of “the single-meaningness” of the film frame, which “can never be an inflexible letter of the alphabet, but must always remain a multiple-meaning ideogram.” And part of the frame’s meaning lies outside of the frame itself, in the implied off-screen space that surrounds it, accumulated in fragments from places the film has already taken us. In the frame above, Jeffrey is in Dorothy’s bedroom, laying his trap for Frank, whom he knows is listening as he reveals his false location to Detective Williams. Just as a good stereo image on a sound recording can help us locate ourselves in the implied depth and space of the music, so too a film image suggests so much more than the boundaries of the image itself. Rather, we map out, intuitively and perhaps even unconsciously, the implied spaces outside the frame, creating a blurred off-screen narrative simultaneous with the narrative on the screen.

In the instance of the frame at second #6721, we know that Frank is somewhere close, about ready to enter the apartment, and that Detective Williams is on his way, even though none of these events are depicted on the screen. “’Things’ do exist, even when we do not see them,” William James wrote in Pragmatism, and perhaps the movies which endure, which somehow stick in the mind, are those which create the conditions for the sort of imaginative speculation that allows for the rich cultivation of the implied off-screen space.

In any case, here, below, is a highly subjective schemata of Blue Velvet’s visual stereo image at the point of second #6721, as signified by the film frame at the center (click to enlarge). 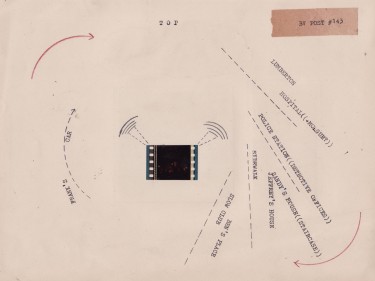 The map, concocted in a clockwise flow, suggests some of the places outside of the frame itself, and the way they float and move and rearrange themselves, never remaining static, always in flux, blinking in and out of awareness but always present, at the margins, waiting . . .