TIME IN A BOTTLE: “THE GOOD DOCTOR” 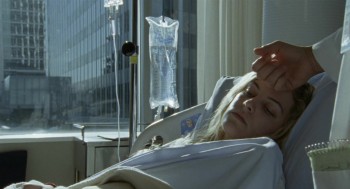 After leaving his native Britain for the U.S., Dr. Martin Blake (Orlando Bloom) begins his residency in general medicine in a chaotic, understaffed hospital in an unspecified coastal city. This well-mannered, middle-class young man is vying for a fellowship in infectious diseases. Unfortunately, he is off to a bad start: He falls out with a powerful nurse, Theresa (Taraji P. Henson); and he inadvertently endangers a non-English-speaking patient with a potentially lethal dose of penicillin.

Screenwriter John Enbom succeeds in a difficult balancing act: The more events point to Martin’s culpability in two deaths, the greater his superiors’ enthusiasm for his work. The odds for his receiving the grant increase, in spite of his carelessness and emotional disarray. You actually want him to get caught. This is an unusual role for Bloom, who is here much more of a pasty nerd than the suave athletic types he is known for. Encouraging an actor to branch out is fine (Bloom is one of three producers), but giving the poor guy a Monkees haircut that screams, “toupee!” is cruel and unusual punishment.

His love interest, Diane (Riley Keough, daughter of Lisa Marie Presley), is a patient—and a minor—with a potentially dangerous urinary tract and kidney disease called pyelonephritis. Like Martin, she is both attractive and uncharismatic. Their supposed mutual attraction is sometimes hard to swallow, as is the presumption that his obsession is so powerful that he tampers with the medications she takes home after her first stay. She survives, but ends up returning to the hospital. He dares venture further, injecting unsafe solutions into her IVs. Enbom’s script is symmetrical. Martin’s selfish intervention in Diane’s treatment is echoed later on when he spikes the recreational drugs of an orderly, Jimmy (a terrific Michael Pena, who definitely does have charisma), who has been blackmailing him with Diane’s implicating diary. Jimmy is the proletarian Latino double for the privileged Anglo.

This is that rare, balanced American indie: deftly directed (by Lance Daly), understatedly performed, and intelligently and tightly scripted. (Daly, who made Kisses, may be Irish, and Bloom, English, but this is a stateside production.) Kieran Lynch’s score neither oversignals nor overwhelms. Save for a few scenes in the hospital, the ambiance is placid—with the help of that underpopulated feel that often accompanies low-budget filmmaking. Bloom and Keough’s withheld energy works well in this environment—separately, of course—with little of the scenery chewing you frequently find in films set against inert backdrops. The Good Doctor‘s diverse elements are so extraordinarily unified that the overused adjective organic just might be appropriate—if you can put out of your mind such conspicuous incongruities as the spacious split-level flat on the beach, replete with irregular, arty windows, in which this recent med-school graduate resides and plots.

Distributed by Magnolia Pictures, The Good Doctor opens this Friday at Cinema Village in New York.