The Week in Cameras: Sony NEX-EA50 and Zacuto Shootout

by Michael Murie
in Cinematography, Columns, Filmmaking
on Aug 20, 2012

New Large-Sensor Camera From Sony
Sony has announced another new camera, the Sony NEX-EA50, which fits somewhere between the very consumer-ish NEX-VG20 and the semi-professional NEX-FS100. The common design element of NEX cameras is the use of Sony’s E-mount, which has a very shallow flange depth – the distance from the mount to the sensor – making it possible to use a variety of lens mounts with an appropriate adapter. 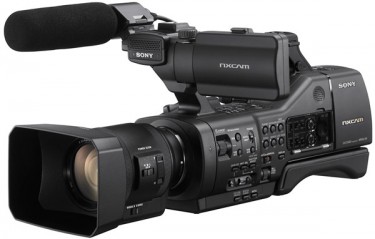 The NEX-EA50 is clearly aimed at the event and documentary shooter. It has a new body shape with an integrated shoulder pad (which can be adjusted), XLR audio inputs, and comes bundled with an 18-200mm servo zoom lens. While you can configure the NEX-FS100 for shoulder shooting, that requires some sort of rig and an external EVF or monitor.

Like the NEX-VG20, it has a 16.1MP APS-C sensor rather than the Super 35mm 3.4MP sensor in the NEX-FS100 (the APS-C and Super35mm have virtually identical image areas when capturing video images.) The higher-resolution chip could mean that the NEX-EA50 has more moiré issues than the NEX-FS100. We also don’t know yet what image control options are included in the camera.

Another interesting feature is a digital zoom capability controlled by the zoom rocker switch that is described as a “lossless digital zoom effect.” However, one thing the camera lacks is a built-in neutral density filter. This is a feature added to the NEX-FS700, but not to this camera.

At $4,500 with the lens, this camera adds a complication for those who are considering the NEX-FS100. It’s expected to ship in October.

A Budget Servo Zoom Lens
Perhaps one of the most interesting features of the NEX-EA50 is the 18-200mm Servo Zoom lens that comes bundled with the camera. It appears to have the same optics as the 18-200mm lens Sony has been bundling with the other NEX video cameras, however, it adds a power zoom function. Sony has said that this lens will work with the NEX-FS700, which also has a zoom rocker switch (the NEX-FS100 does not).

At f3.5-6.3, it’s not the fastest lens about, though the thing I disliked most about the manual lens is how difficult – impossible – it is to do a smooth zoom with it. Assuming this servo lens does a smooth zoom, that’s going to be pretty impressive.

When Sony rolled out the NEX-FS700 with a rocker switch, I wondered whether they would release something like the power zoom they produced for the PMW-F3; the SCL-Z18X140 FZ 18-252 f3.9-6.8 lens that costs $9,699. It appears that Sony isn’t going that route with the NEX- line. It also makes me wonder whether the 4K option for the NEX-FS700 may be more affordable than I had been thinking.

Revenge [on] the Great Camera Shootout
What is the Internet without a bit of controversy? Last week Zacuto released the third and final part of their “Revenge of the Great Camera Shootout.” The second episode had already created controversy when Gizmodo reported that no less than Francis Ford Coppola preferred the Panasonic GH2 over the Sony FS65.

This latest episode doesn’t have anything nearly as shocking, but Art Adams at ProVideo Coalition has stirred things up a bit with a column: Why Zacuto’s Latest Camera Test May Have Screwed Us All. This piece asks the question “Does a GH2 really look as good as an F65?” and in it Art takes them to task for both the methodology of the tests as well as the way the material was presented. He thinks the tests were really a test of the skill of the DP, and that they didn’t clearly portray the real difference; how much extra work went into getting the best performance from some of the cameras.

Now if you watch Episode 2, the beginning actually starts with Francis stating which cameras he liked, and is followed by a comment from Steven Postner saying, “You guys don’t have an understanding of how dangerous this stuff really is, so sure, show your iPhones, show everything, but understand you’re putting stuff out there in the field that’s affecting everyone of us in this room…so be careful.” Clearly, Zacuto knew they were playing with dynamite, but Art doesn’t think they did it right:

“The biggest failure of this test is that it made us play an unfair guessing game. The first part showed us all the cameras in sequence but made examining their differences almost impossible because the scene was relit for each camera.”

I think Art’s article is worth reading most notably because he draws our attention to The Technical Camera Documentation [PDF].

This document explains the real differences between the cameras; the time spent to light the scenes, and the time spent in postproduction. You’ll see that the GH2 took 52 minutes to light the scene and 1.5 hours in post-production to produce that image that looked as good as – or better than – the F65. But the F65 had no relighting done, and required only .5 hours in postproduction

But Art’s real point – perhaps – is that the headlines generated by this test will result in those less knowledgeable – i.e. producers – coming to him and wanting to know why he doesn’t shoot with the GH2:

“I, for one, am dreading the phone call where, based on this test, someone tries to talk me into shooting with a GH2 because it “looks nearly as good” as an F65.”

Steve Weiss, who produced the Great Camera Shoot Out, has written a couple of responses to the piece at the end of Art’s article:

“I can’t control what journalists will say or conclude. That’s what they do. But I never asserted any of the stuff you say in your article.”

“Now this issue about sending a bad message to producers. As a DP or Director you need to fight for the gear you want to use.”

“No matter how we try to smash it into peoples’ heads that lighting is what makes great shots, not cameras, people keep driving it back to the magic bullet of the latest and greatest new camera.”
Steve Weiss

In Zacuto’s defense, this test was created to address concerns about the previous two shootouts where the cameras were used in identical situations. Many people considered that kind of test unfair too:

Rather than have each camera set up optimally, they are just thrown in there and left to cope. This is not how to handle the cheaper cameras even in an empirical test. The more expensive stuff has a wider operating window, and don’t need as many work arounds. Yet people tend to put all the weight and importance into this form of empirical testing, even though it has nothing to do with how you’d shoot in the real world.
Andrew Reid – EOSHD

Who’s right? Probably everyone. It’s clear that, in ideal circumstances, you can get very good images out of even the cheapest modern cameras. It’s also clear that you can save time – but spend more money upfront – by using the better tools. This is not really news, is it? Just make sure you have the facts for when your producer wants you to shoot with the GH2 instead of the Canon C300, or the iPhone.

I heard George Lucas saw the Zacuto test and is now planning on reshooting key scenes of Star Wars with a GH2 for a special Vimeo rerelease
Evan Luzi, The Black & Blue

Films are put together by producers and its your job to sell your Camera & your approach…we are much more efficient using the Alexa at extremely low exposure levels…Zacuto test showed you spend upfront on the best camera you can save on everything else lighting, time, post = more time with actors
Rodney Charters