Reactions to the Canon C100 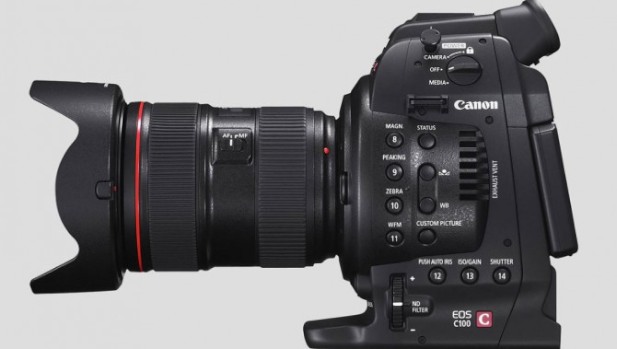 by Michael Murie
in Cinematography, Filmmaking
on Aug 30, 2012

Canon went and shrunk the C300! The company just announced its baby brother, the C100, which looks very similar but is slightly smaller and is absent a feature or two. Most notable, perhaps, is the use of the AVCHD codec, and the LCD has been moved to the back of the camera from the detachable handle. But the C100 has the same sensor as the C300, and may produce a very similar image. All of those issues may be less important, however, than the price; at around $8,000 it will be half the price of the C300.

To get the opinion of actual shooters about this announcement, I spoke to a couple of DPs who already have extensive experience with the C300.

Paul Antico owns a C300, describing it as “incredibly versatile, and quick to work with, and producing a great image with great dynamic range and sharpness that grades well.” Noting that we don’t yet know what the quality of the image from the C100 is like, he’s still optimistic that it will be very similar to the C300 since it uses the same sensor.

“For me, the Canon C300 allows the camera to get out of the way so that creativity can flow, and jobs get done for clients with minimal pain and minimal waste of time. The C100, in many respects, is the evolution of that concept at a lower price. While I don’t think that the codec it uses will suffer much in overall image quality, it will negatively affect workflow. AVCHD is difficult to work with compared to the XF codec. It’s also 4:2:0, which is an important consideration.

“Another issue that I see is that the monitor on the C100 is in a difficult spot. One of the amazing things about the C300 monitor is that it can be moved practically anywhere on top of the camera. The articulating and high-quality EVF on the C300 is not present on the C100; it’s fixed.

“It also lacks super slow motion, although the C300 has the same limitation. The C100 doesn’t have frame rates selectable in small increments, so that is an issue when you want to dial in a slight variation in your frame rate for effect.

“Finally, there’s no SDI output. That is not a major issue to me, as the HDMI has uncompressed output and can be recorded if need be.

“[Despite this] it does have most of the same traits of the C300, including a very high-quality build and a great hand holdable form factor. It offers dual recording. It offers XLR, and ND filters. It offers waveforms; you’re essentially getting the entire c300 visual engine into AVCHD for half the price!”

When asked whether he was thinking of replacing his C300 with a C300, Paul answered, “I suspect few C300 owners will be jumping to the C100 because of the necessary reductions in features and ergonomics. But for the Sony NEX-FS100 crowd, it’s definitely something to look at. I would jump for this camera over the FS100 or even the FS700. It’s definitely much easier to work with in the field, which is where it matters. “

One new feature that the C100 adds is one-shot AF and Paul said he hopes that feature gets added to the C300. “I’ve heard from many sources the C300 is getting a big software update in November…”

Rick Macomber is a DP who shoots news by day and spends much of the rest of his time shooting music videos, interviews and short form content using Canon DSLRs. He’s been thinking about making the jump to a large-sensor video camera for the past couple of months, and was seriously considering both the Sony NEX-FS700 and the Canon C300. He’s already shot several pieces on the Canon C300, so he was drawn to that camera, but hesitant about the price.

He was also hesitant because he suspected that Canon might be about to announce a new camera. “I had this foreboding feeling deep in my gut that Canon was about to pull a new baby rabbit out of their hat… so I didn’t pull the trigger,” he says. On the image quality of the C100 he says “I know some friends who’ve been secretly shooting with it and I will have to wait for the jury to come back in before I make any final decision on a purchase.

“I’m glad Canon stuck with the same super 35mm sensor, ND filters, XLR onboard audio inputs, ISO range, log gamma, etc. What will be interesting to see is how it holds up using the AVCHD codec in grading, and what the image quality will look like with 24Mbps bit rate and 4:2:0 color space.

“I can’t wait to compare images with the C300 recording to both the SD cards using the AVCHD codec AND recording uncompressed HD to an external recorder. That will be a deciding factor for me. The money I’d save on the C300 I would spend on an external recorder and mounting rig if the image quality shows noticeable improvement.

“I think that small LCD would work in a pinch for run-and-gun shooting, but it will need an external field monitor for proper image monitoring and nailing sharp focus. The EF only mount is no big deal for me since I own Canon EF glass anyway (I can hear PL people screaming now!)

One last thing about the C100; as Rick noted, there’s been a suggestion that the C100 will be priced less than $8,000. But Canon’s press release has an estimated list price of $7,999, and Canon cameras nearly always appear at their list price. 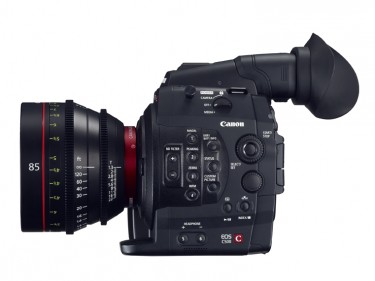 Least we forget, Canon announced some other things at the same time as the C100. They ‘announced’ the C500, except that they had already shown and talked about that camera before. The C500 is essentially a 4K version of the C300 with an estimated list price of $30,000 and October availability. It’s available in EF and PL mount versions.

Canon also announced two EF Cinema Prime lenses, and two compact and lightweight Cinema Zoom lenses for 4K and 2K camera. The 14mm T3.1 and 135mm T2.2 EF cinema prime lenses are expected to be available in the first half of 2013.