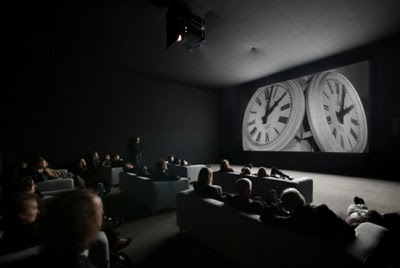 For those New Yorkers who, like me, feel like they’ve only scratched the surfaced of Christian Marclay’s enthralling 24-hour installation, The Clock — or, more pressingly, for those who have yet to experience it at all — there is excellent news today.

The Museum of Modern Art has announced that Marclay’s immersive exploration of cinematic time will return to NYC for a month this winter, running from December 21 to January 21. There will be a number of days when the entire film will screen continuously, most notably on New Year’s Eve, an event which promises to be extremely memorable.

Below is the press release:

NEW YORK, September 12, 2012–The Museum of Modern Art will show Christian Marclay’s groundbreaking video installation The Clock (2010), from December 21, 2012, to January 21, 2013. Winner of the Golden Lion award at the 2011 Venice Biennale, The Clock is a cinematic tour de force that unfolds on the screen in real time through thousands of film excerpts that form a 24-hour montage. Appropriated from the last 100 years of cinema’s rich history, the film clips chronicle the hours and minutes of the 24-hour period, often by displaying a watch or clock. From the legendary to the obscure, The Clock incorporates scenes of car chases, board rooms, emergency wards, bank heists, trysts, high noon shootouts, detective dramas, or silent comedies.

Christian Marclay–The Clock will be shown in the Museum’s Contemporary Galleries during public hours throughout its run, and will be free with Museum admission. Admission to the installation, which will seat 130 visitors, will be on a first-come, first-served basis, with no time limits for viewers. On December 31, MoMA will present a special New Year’s Eve showing of the work in its entirety, which will be the first opportunity for the public to view all 24 hours of the piece at MoMA.

The Clock will also be shown in its entirety on three weekends: January 4 and 5, January 11 and 12, and January 18 and 19. The Museum’s Contemporary Galleries will also remain open during all of the after-hours screenings.

Beginning December 21, the Museum will provide updates on visiting The Clock, including live updates on the queue, via MoMA.org and MoMA’s Twitter account, @MuseumModernArt.

Christian Marclay–The Clock is organized by Sabine Breitwieser, Chief Curator, with Martin Hartung, Curatorial Assistant, Department of Media and Performance Art. The Clock was acquired by MoMA in 2011 as a promised gift from the collection of Jill and Peter Kraus.