The Week in Cameras: iPhone, Full-Frame and IBC News

by Michael Murie
in Cinematography, Filmmaking
on Sep 17, 2012

Another week, another iPhone announcement.

I remember when I used to hang on every word as a new iPhone was released. What were the features? When would it be available? When could I order it? I’ve even lined up – twice – just to get it on the first day. In retrospect, does it really make sense to stand in line for several hours waiting for a… phone?

But now it’s the sixth “new” iPhone (Original, 3G, 3Gs, 4, 4s, 5) and I find I’m not so enraptured. I don’t need to know immediately whether the camera is any better (see footnote 1) or if there are new video capabilities (see footnote 2) or some other new killer feature. The truth is, the iPhone has become an assumed part of my daily life, I use it as a tool. I don’t want to give it up, but I don’t obsess about it so much either. It’s just “there.”

I couldn’t help but wonder whether I was having the same reaction to Sony’s latest large-sensor announcements, the NEX-VG30 and NEX-VG900. Normally I’d be gathering as much information as possible about all the features of these cameras as soon as they are announced. Now I find I’m willing to sit back and wait for something to ship before I get excited about it. Perhaps it’s the deluge of large-sensor cameras over the last few months – including Sony’s NEX-EA50 two weeks ago – that has caused this reaction. Or maybe the novelty and excitement of large-sensor cameras has passed?

Admittedly, the VG30 and VG900 are both part of Sony’s consumer line, but the NEX-VG900 is an interesting addition because while it looks very similar to the NEX-VG30, it’s one of Sony’s first cameras to stuff a full-frame sensor – rather than APS-C or Super35mm – into the E-Mount. They’ve also announced two other “still” cameras that feature a full-frame sensor, but we’ll ignore those for today.

What puzzles me is the positioning of the VG900; should we consider it a goosed VG30, or a full-frame NEX-FS100? Despite an optional XLR adapter, its body shape and feature set casts it clearly in the VG30 consumer end of things. Which raises the next question: with a $3,299.95 price tag compared to the VG30’s $1,799.95 (body only), who will spend $1,500 more for that larger sensor? I’m sure there will be some who crave wider fields of view and the even shallower depth-of-field possible with a large full-frame chip, but still, it’s a curious positioning.

The end of film
Roger Deakins made an appearance at IBC for ARRI talking up the Alexa camera. Roger has been talking about the move to digital for some time, and he has already used the camera on two movies: In Time and the latest Bond movie, Skyfall. He has some very interesting comments about the Alexa, and the transition to digital in general:

“I said to Sam [Mendes, director of Skyfall], well you should just look at what I did on In Time, you should look at the tests […] just look at one thing in the tests and that’s the actors’ eyes, because I think the one thing that really persuaded him was the clarity of the actors’ eyes compared with film. There’s just a sort of snap that you don’t get on film, to my eye anyway.”

“I was surprised actually that the change over was so simple. When we started shooting In Time, the only thing that threw me was I didn’t here the mag rolling… and I miss that. I kept asking Andy, my assistant, to get a little tape or something so he can play that for me.”

You can watch the interview (there are three parts) here: A conversation with Roger Deakins – Part 1

The end of film Part II
Is it just a coincidence that it was also the week that Fuji announced they were discontinuing film production?

“Fujifilm has mainly provided negative films for shooting and positive films for projection in its motion picture film business operations. However, in order to adapt to the recent rapid transition of digitalization in the shooting, producing, projecting and archiving processes of motion pictures Fujifilm has decided to shift its business operations to provide products and services designed for digital workflow of motion picture production and projection.”
Announcement on Motion Picture Film Business of Fujifilm 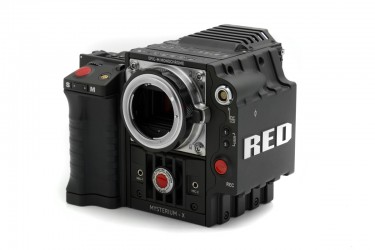 RED goes Black & white
When RED announced a black-and-white camera last week, the $40,000 EPIC-M Monochrome, several people on Twitter wondered: What are they thinking? Haven’t they heard you can desaturate color footage to make black and white?

Turns out all that color processing (and the Bayer colored filters over the photosites) results in less than 100% accuracy, as Jarred Land of RED explained on the RED forum:

“If you are shooting B&W it is leaps and bounds better than shooting in color then transferring to B&W later. It is why they continue to make B&W film. There are no color filters on each of the pixels so you get increased light to each pixel, and there is no debayer process, so you get a much “sharper” image… a better tonal transfer in gradients as there is no interpolation.

“[…] The difference here is that instead of reading 4 pixels (RGBG) to interpolate (guess) 4 final color pixels, you are reading 4 unique, accurate imaging pixels to create 4 accurate final pixels. That is why all Bayer Pattern CMOS sensors loose effective resolution, for example our 5K cameras measure an accurate 4K resolution after Debayer, and most 1080p cameras net only an accurate 1.2-1.6k image.

“It’s an important distinction.. one of the reasons we have always touted resolution is so important, and also the reason you are now starting to see cameras that do oversampling like the F65.”
REDUser: EPIC-M Monochrome

4 and 8K
IBC seemed to confirm one thing; 3D is dead, and the electronic manufacturers are moving on to 4K and 8K. Canon was showing their previously announced Canon C500 4K camera, which is expected to start shipping at the end of October. Sony was showing an 8K TV, which is amazing, but they’re mostly upsampling 4K footage to get content!

Hopefully we won’t have to all go out and buy this stuff.

DSLRs still live!
Meanwhile, Panasonic and Canon are announcing new DSLRs at Photokina this coming week. The Panasonic GH3 promises a very high 72 mb/s All-I codec, so this could be an impressive video camera. The real question: who does the GH3 steal market share from? Will Canon or Sony buyers take a look?

Canon is releasing a slightly cheaper full-frame DSLR, the 6D, which almost appears to be a replacement for the Canon 5D Mark II, which they had continued selling after the Mark III was introduced. With luck, it will have the same video capabilities as the 5D Mark III, but it’s doubtful that Canon has done anything to goose the video capabilities of their DSLRs beyond that.

Now if they have, that would be a surprise!

(1) It’s a little faster and a little bigger and takes up a little less volume, but you may hardly notice it.
(2) The camera is improved; they claim better low-light performance, though some initial tests don’t show dramatic differences in quality. On the video side, they claim “Improved video stabilization helps prevent shaky footage. Face detection for up to 10 faces means everyone can have a moment in the spotlight. You can even take still photos as you record,” but it’s no ARRI Alexa.

Of course I’m going to get an iPhone 5.