Narrowing the Gap at Fantastic Fest 2012 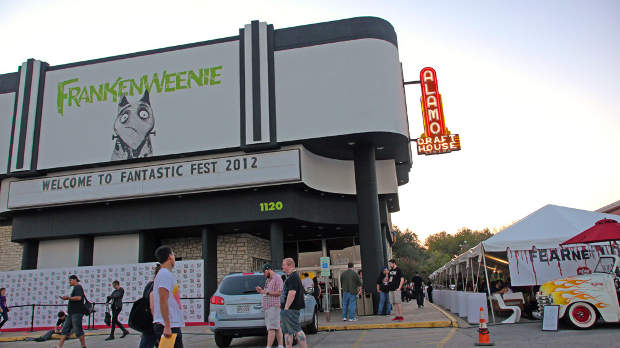 by Michael Medaglia
in Festivals & Events, Filmmaking
on Oct 2, 2012

As a filmmaker, I find myself more and more impressed with the indie game-making community. They’re supportive of their own at a level I wish we filmmakers were and they’re constantly innovating new ways of distribution. Because of this, it’s become a little quest of mine to learn more about indie game-making and how it overlaps with indie filmmaking. How are they similar, how are they different, and what can each hopefully learn from the other?

One place where the filmmaking and game-making ley lines intersect is Fantastic Fest. It’s one of the biggest genre film festivals in the US and one of the first film festivals to feature an interactive component. If you’ve never heard of it, Fantastic Fest takes place in Austin every September and is dedicated to horror, sci-fi, fantasy, Asian and “cult” films. At the fest, you’ll find mainstream and indie films alike. Its past world premieres include There Will Be Blood, Apocalypto and Gentlemen Broncos. More recently, the festival has also featured Fantastic Arcade, a kind of mini-festival dedicated to the art and culture of indie-gaming.

Fantastic Arcade offered games on devices ranging from handsets to laptops to full-on arcade games. Several developer teams gave commentaries and Q&As about their games. One in particular that stood out for me was Unmanned, an indie game by Paolo Pedercini.

Part game and part interactive art project, Unmanned is an introspective experience where you’re essentially living a day in the life of a UAV (a.k.a. drone) pilot for the US Military. You get to remote-control drones by day and then return to your suburban home in time for dinner with the family. Unmanned is as much, if not more, about your personal life than it is about military operations and you’re just as likely to win a medal for not cutting yourself shaving as you will for surveilling a suspicious target. The achievements are (purposely) ironic medals, leading you to wonder just how important these pats on the back really are to you.

The game display is split screen: usually one half is dialogue while the other is a rudimentary arcade-like game in which you have to perform such tasks as driving a car around a barren landscape. You’re forced to multitask between the two screens, often sacrificing one goal for the other, with your choices subtly affecting the narrative. It was a fascinating mix of narrative and gameplay, and a great example of how both can interplay with each other. For the words and dialogue, Paolo collaborated with author and filmmaker Jim Munroe.

Filmmaker: What kind of cues can indie filmmakers take from indie game-makers?

Munroe: Oh yeah video game people are less money-centric, for the time being anyway. The whole process, from the beginning of moviemaking, is how can we get funding? Who do we go to for funding? Who are the investors? How can we get this greenlit? The traditional movie community, for historical reasons, has been obsessed with money to get the thing rolling and I find that even with indie movies there’s a lot of that kind of talk. The labor is the main cost now. When people are making games, people don’t consider the cost of a computer because everyone has a computer. So, to me that’s exciting.

Pedercini: Yeah. [games] might be more similar to animation. You’ll have a lot of single, one-man show animators. It’s super labor intensive but, you know…

Filmmaker: How do you see the two collaborating in the future?

Munroe: I have an idea for an initiative (I run a video game arts not-for-profit in Toronto). I’d really like to get some filmmakers who are excited about making games into that kind of format. So I could say: you’re a filmmaker, these are some talents you already have. I also have an idea for a writer incubator and an animation incubator–same kind of thing. You know, like-minded, skilled people coming together and forming some games out of that structure.

The barriers to it are mostly cultural I think. A lot of filmmakers are kind of bummed out by how popular games are getting, and that indie games are the new ‘indie film’ and shit like that. I feel like there’s a certain amount of conservatism to that. They’ve committed to the craft of filmmaking. I’ve just never been that way: I like making stuff and I get better at it, but I’m not so focused on the identity of one thing or the other. Whereas I think a lot of filmmakers are like “I want to be a director, and that’s going to be my thing”.

Pedercini: If you’re familiar with contemporary mainstream (not indie ones) games, there is a bit of an inferiority-complex toward Hollywood. A big part of the filmmaking craft can be applied to games, and is being applied. There is increasingly sophisticated face-capture, mo-caps. A lot of actors make that transition. You’ll see acting, more cinematics, more writing of that kind, even camerawork. All that stuff.

Sometimes in the indie gaming community you actually have a kind of reaction to that stuff. We are interested in the specificity of this medium. Like, why this medium is interesting for us. Not like, mocking this other, more-established one. Now there are increasingly sophisticated motion capture. A lot of actors do that. You’ll see more of that. More camera-work. Not mocking this other established medium.

On the other hand, there are a lot of filmmakers trying to bridge documentary filmmaking with game-making. There are lot of granting opportunities that are being linked to multimedia things. To have a transmedia presence. Documentaries are prone to be more fragmented. To me the big part of documentary production is the research part. Once you’ve done the research, you can make a story out of it, creating a narrative. Or you can find another way to present it, and the other way can be an interactive, non-linear or game-realized situation.

Munroe: One of the most clear examples of informational expositions I’ve seen in games is Paolo’s McDonalds. Basically you discover the information through playing. Everything’s fine until the demand at your counter gets too high. Then you have to make this decision, do I raze the rainforest or do I give the cows beef-hormone injections? So, one of the things that games are are really good at is introducing almost expositional, systemic processes in a great way. In a way, that would seem boring or didactic if you were to discover them through film. It’s almost like interactivity is what makes the data engaging, in the same way that story would make the data engaging in a documentary. Some stories are not good for that kind of exposition.

Filmmaker: How did Unmanned get made?

Pedercini: I made it in the span of two years. In the second year I contacted [Jim] for material. I was working on other projects in between. It was a spare-time approach. It’s not that complicated or technical, to be honest. What takes long in games is the content-creation.

Filmmaker: What are your goals for the game? What do you hope to happen with it? Do you have a measure of success?

Pedercini: To me it will accomplish it’s goals when people seem to get it. What’s nice is you can get a lot of feedback, you can see what the reception is immediately. That’s definitely been positive. To me, what’s most positive is being well-received outside the gaming community. It’s uncommon for independent games. Even very popular games sometimes don’t get outside the game community.

Munroe: For me, I’m interested when I come across feedback that shows that it made you think in a certain way–not necessarily my way, but that they thought about the issue in a different way as a result of playing the game. That’s great. The whole thing when it comes to culture of being distributed. For games, other than our labor, there no cost. It’s not like when I make a book, a certain number, X-thousand copies, sold is the mark of success because that’s when I’ve made Y-amount of dollars we need to make back. So yeah, for me it’s interesting to see people’s responses and the political discourse.

Unmanned is currently available to play online for free at unmanned.molleindustria.org.