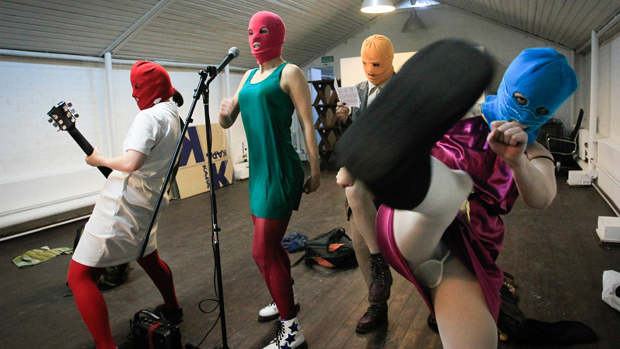 [PREMIERE SCREENING: Friday, Jan. 18, 8:30pm — Prospector Square Theatre, Park City]
I am the co-director of Pussy Riot – A Punk Prayer and an executive producer on Jehane Noujaim’s The Square.
The concept of sacrifice is at the heart of both movies. It would be hard to exaggerate the sacrifices made by the thousands of young people who have spent two years battling for freedom and justice in Egypt. Many have died, been tortured, beaten and arrested and their sacrifice and that of their families will be recognised as one of the most significant in Egypt’s long history. What the protestors of Tahrir Square have done is to set their country on the road to a more just future.
The sacrifice of the three jailed members of Pussy Riot, Nadia, Masha and Katya is no less historic or heroic. These three young women have sacrificed their liberty and contact with their young children in order to inspire others to fight for freedom, democracy and gender equality in Russia. They have also inspired thousands around the world to challenge their own orthodoxy and come up with better ideas about what they really want their society to be.
I am very sceptical about the concept of the filmmaker as do-gooder. I don’t see film making as a moral obligation or noble calling – it’s simply a great job that we are lucky enough to have the freedom to choose and it’s a thrill to tell stories that we think are interesting. If we have the chance to show what others have sacrificed and achieved on our behalf then that is of course a tremendous privilege and one that we are honour bound to shout about to the world about.
Sundance Responses 2013